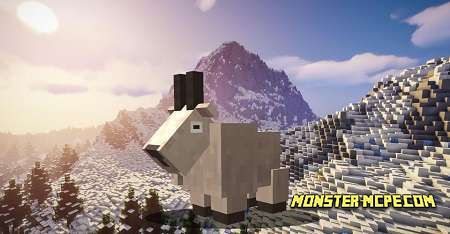 We are in a hurry to present to you the latest news from the world of Minecraft! On October 28 at seven o'clock in the evening, the developers of Mojang announced and presented to us new innovations for the Minecraft world on their Twitter page.

We all began to wonder when, after all, Mojang will gradually add the content presented at the Minecraft Live 2020 event? Maybe already this winter? But no, they decided otherwise, and we really like their decision!

The first thing we draw your attention to is that Mojang decided to add new animals to the Minecraft world, these animals were the mountain goats previously mentioned in various articles. You may have already heard about these animals more than once, and now they can finally live in your Minecraft world.

As mentioned above, new animals were added and presented to all fans of the Minecraft world along with the release of a new update that Mojang presented on the evening of October 28. This is a new update with Experimental mode and features. 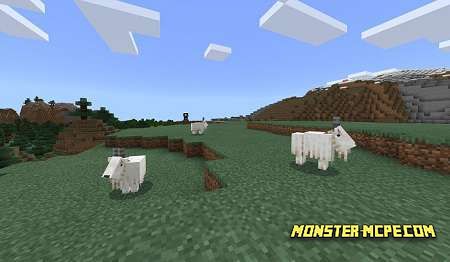 The current 2020 is very significant and important for the Minecraft world, as it added a huge new world, namely, it changed and filled the Nether world with various unique and very interesting content! The Nether update has added new unique and exciting biomes, each with unique flora and fauna. But by the end of this year, Mojang never ceases to amaze us and presented us with another big surprise at the annual Minecraft Live event.

During this virtual event, the developers of the Mojang studio presented to all fans of the Minecraft world an upcoming update that will completely change the cave world, namely improve the caves by adding new features and some features. Also, we did not forget about the rocks, which will also receive changes. Mountain goats are also part of this update, but thanks to the new test update, players can already meet new animals in their Minecraft world today. 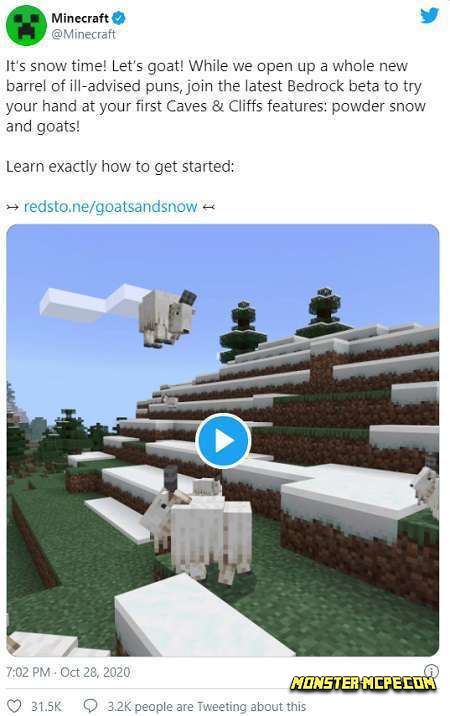 How does it work and how to play with new animals in your Minecraft world?

Please note that unfortunately, mountain goats are not yet available for the PC version of the Minecraft Java game. New animals can only be seen by users of devices such as Xbox One, Android, or those that support Windows 10 and Android versions. If you are using these devices or devices that support the above versions, then you can play with new animals. See below how it works.

2. Open the beta version of the game for your platform;

3. The game will start updating, after the update the default beta version will be used;

4. Create your game world to explore new features of the update;

5. Open and use the Game Settings. Put activation on Caves & Cliffs. This function is under the heading Experiments.

After all these actions, mountain goats should spawn in your Minecraft world.

We previously presented an article on when we should expect both the first content additions of the upcoming update and the full release. Unfortunately, Mojang has not updated the information yet and there is no exact release date for the Caves & Cliffs update. As we said earlier, most likely this will happen in the Summer of 2021, but with such active actions of the Mojang studio, this can happen even earlier, which cannot but please us!

Related News:
Minecraft PE 1.16.200.52 for Android
Not so much time has passed since the recently held Minecraft Live
The Caves and Cliffs Update - Release Date
In today's article, we will consider with you the date of release of
Minecraft 1.17: The Caves and Cliffs Update
Greetings to all fans of the Minecraft world. Today we'll tell you
World Animals Add-on 1.16/1.15+
Would you like to add more different animals to the Minecraft world?
Comments (0)
Commenting