Dear fans of the Minecraft world, we are pleased to present to you with a new version of Minecraft Bedrock Edition 1.16. But we draw your attention to the fact that this is background information, the file is temporarily unavailable for now. As soon as the file is available we will immediately add it. Follow the news. In today's article, we will tell you about new content that awaits us all in the upcoming Nether Update, believes us, this information is worth it!

We all expect a new global update, Nether Update, an update that should change the whole Nether making it more interesting and exciting for the game. This was announced at the last Minecon-2019. This version has already been published for users of Android devices. Let's get to the fun part, let's go to HELL!

We will start our review with such a mob as Piglin!

This is a hostile mob that spawns in some of the Nether biomes, but most often in Crimson Forest. Attacks creatures like the Hoglins. These mobs are hunted only in groups. They love gold very much. Will not attack the player in gold armor. But if the player opens the chest, the golden armor will not save him. Picking up gold, for example, gold bars stands and examines them.

This mob can exchange various useful items for gold. In the presence of Fire of the Soul runs away. Being in The Overworld turns into a Zombie Pigman. Can play with baby Hoglin. These mobs build their bastions. Able to open doors, so be careful. The probability that you will meet a young Piglin is 25%. Has 16 Health. 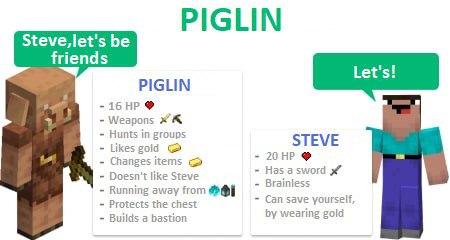 The next mob that we mentioned several times above is Hoglin. It is also a hostile mob like Piglin, and like Piglin spawn in Crimson Forest. These creatures also move in groups of 4 mobs. This creature can throw up a player during an attack. Increased attack radius. Propagated using crimson fungus. He does not like and is afraid of warped fungus. Drops raw porkchop and leather. With a 25% chance, you can meet the Hoglin baby. Hitting them will scatter in different directions.

Where does the strange name Hoglin come from?

For those who don’t know, this name was chosen by the players during the voting, which the developers of the Mojang studio conducted before the release. Of all the options offered, the players chose the name Hoglin. It was this name that won the vote among other names. The following names were also proposed at the vote:

Items that were made from this material cannot burn in fire or lava. How to get it? To do this, find Ancient Debris in The Nether. Use a Netherit Pickaxe or Diamond Pickaxe to break. Smelting debris in Netherite Scrap. 4 Netherite Scrap + 4 Gold Ingots = Netherite Ingot.

New material is very rare and the most expensive in the world of Minecraft. This material improves diamond armor and other tools and also increases their strength. The first material that has selected the leadership of Diamond in 10 years!

This is a kind of building, a fortification built by mobs like Piglins.

Three new biomes will be added to the Minecraft world such as Soul Sand Valley, Crimson Forest, and Warped Forest.

1. Soul Sand Valley is the most dangerous biome in The Nether. The whole biome is covered with turquoise fog. A large field that consists of Soulsand and the soil of the soul. Fossil remains and pillars are the most common structures in a biome. The open terrain, the frequent spawn of Ghasts, Enderman, and skeletons make the biome very dangerous for survival. It is better to bring ranged weapons and strong armor with you.
In the biome, you can extract bone meal, Glowstone Dust, basalt and explore Nether fortress. You can see a large amount of blue flame; 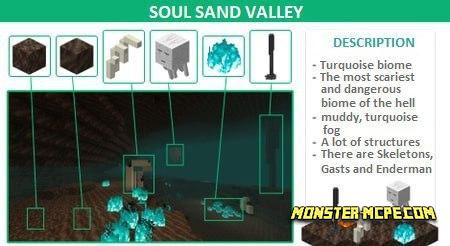 2. Crimson Forest is one of the new biomes in Nether Update. The biome consists of red blocks. The crimson forest contains a lot of vegetation: huge mushrooms, weeping vines, small fungi, light mushrooms. The surface of the biome consists of the crimson Lily and Netherrack. Warped roots can grow on stones. The Crimson Forest is the habitat of creatures such as Piglins and Hoglins. Around the whole biome is covered with a red fog. And much more that you have to explore for yourself in this biome; 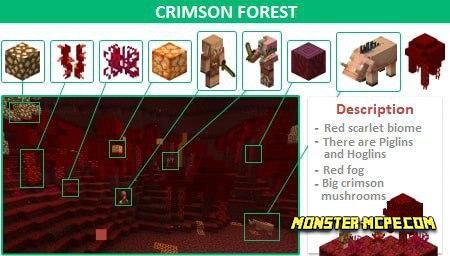 3. Warped Forest is a biome added to Minecraft Nether Update. It consists of light turquoise blocks. This place is good for mining turquoise wood. In addition, warped roots and Nether sprouts grow in the biome. The biome is characterized by dark turquoise fog. Warped Forest is a safe place, only Enderman spawn here. A large number of different vegetation and much more. 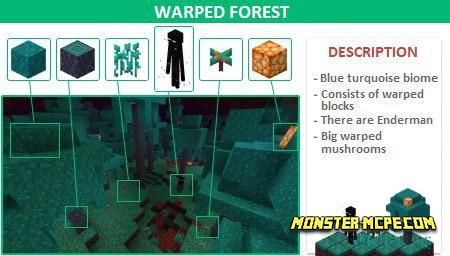 Soul Soil is a block that is similar to Soulsand. It does not slow the player down. The fire on Soul Soil turns blue. 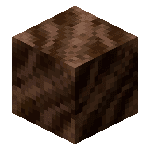 The fire of souls acts just like a normal fire. Deals double damage. Appears if you set fire to Soul Soil. Generated in Soul Sand Valley. Eternal and never goes out. 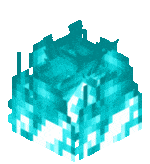 This is a mechanical block that responds to being hit by an arrow or a Trident. It creates a Redstone signal.
The signal level will become higher if you get closer to the center. The maximum signal level can be 15 units.

Related News:
Download Minecraft Java 1.15
We are glad to present you a new update for the PC version of
Download Minecraft Java 1.14
Everyone is looking forward to a new update for everyone's favorite
Taiga Village, Outpost, Jungle, Swamp, Witch Hut and 3 Ravines
This seed will give you the opportunity to visit the stunning taiga,
New Desert Village & Villagers (Creation)
New village which was announced on Minecoin-2018. From now, according
Comments (0)
Commenting