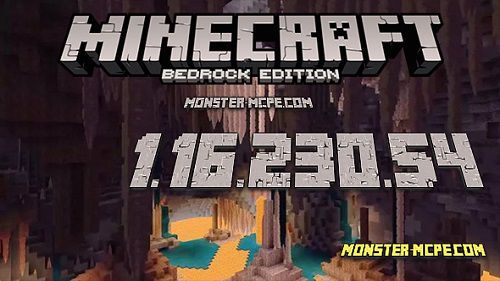 Today, the developers of Mojang surprised us again with a new test update that was presented just a few hours ago, namely Minecraft PE 1.16.230.54. This is a completely new update that is already available to everyone and every user of Android operating systems! In the new update, you will find changes for the Cave Update, fixes for new bugs, and other changes that are related to the gameplay. Let's take a look at all the new changes in the update, Minecraft PE 1.16.230.54.

The first thing worth paying attention to is the caves. Below we will show you a list of the most significant changes in our opinion:

1. The use of leashes for Axolotls has been fixed;
2. Unknown items in the creative inventory have been removed;
3. The time of the destruction of Deepslate blocks has been fixed;
4. Now water and lava most often fall from the drip;
5. Now Glow Lichen can be generated on the walls of underground reservoirs;
6. The use of leashes for Octopus has been fixed;
7. When fertilized, moss can grow vertically;
8. When fertilizing a block of moss from above, even more, moss can grow there;
9. It is now possible to grow an azalea tree from the azalea with the help of fertilizer;
10. Glowing berries are generated in minecarts in the caves;
11. A block of moss can be found in chests on abandoned ships.

The second game aspect worth paying attention to is related to the mountains, namely Powder Snow! In the new update, many changes are related to Powder Snow.

The developers have made 11 changes for powder snow. Below we will show you the full list of changes regarding the mountains:

1. Leather armor prevents horses from freezing;
2. Mobs that live in the Nether world will receive more damage from frost;
3. Polar Bears, Stray, and Snow Golems no longer freeze in the mountains;
4. Now it takes 7 seconds to freeze completely instead of 15;
5. Now frost damage will be dealt with mobs every 2 seconds instead of 3 seconds;
6. The vertical speed inside the powder snow has been increased;
7. Increased the time for the player to get powder snow;
8. If a creature in leather boots falls from a height of more than 2.5 blocks, it falls inward, and does not remain on the surface;
9. If the creature is on fire, it not only extinguishes in powder snow but also melts the block;
10. If the creature is completely frozen, it will shake;
11. The fog effect is applied if the player is too close to the powder snow.

And the last thing that we usually consider with you is, of course, bug fixes of which this time a little more than ten were fixed. In total, 18 new bugs were fixed below we will show you a list of the most significant fixes in our opinion:

1. The place of the player's spawn in unsafe locations on the first connection to the world has been fixed;
2. The charged aura of the Creepers has been fixed;
3. A bug was fixed due to which pictures were not displayed;
4. Improved underwater visibility;
5. Changed the underwater color to better match the PC version of Minecraft Java.
Facebook
Twitter
Pinterest
Minecraft PE 1.16.230.54 for Android
minecraft-1-16-230-54-xbox-servers.apk
Download free[131.3 Mb]