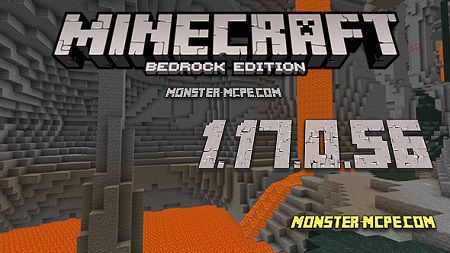 Just a few hours ago, the developers of Mojang presented us with a new version of the test update which is Minecraft PE 1.17.0.56. The new update was released by the Mojang studio not on Wednesday as expected, but on Thursday, but this is not a problem, since the main thing is what the developers managed to do over the past week. The new test version of MCPE 1.17.0.56 is already available for all Android operating systems.

We also want to note that the new update has 25 new changes for Caves and Cliffs and 15 new bug fixes. Yes, in general, this is a small update, but one of the important ones that positively affects many aspects of the game. Let's take a look at all the features of this update.

What's new in the new update? As mentioned earlier, the new update has 25 new changes for Caves and Cliffs and 15 important bug fixes. The first thing you should pay your attention to is, of course, the changes associated with the experimental features.

All in all, Mojang has added 4 more experimental changes to the Caves and Cliffs update, let's take a look at them below:

Now let's talk about the changes.

In the new update to Minecraft, 21 more changes were made. Some of the main ones are mentioned in the list below:

1. Now the Axolotl mob will no longer attack invisible creatures;
2. The textures of the axolotls have also been updated;
3. If players breed axolotls, these mobs will no longer change color in the bucket;
4. Now amethyst geodes will be generated less often;
5. Mobs can again search for a path near Pointed Dripstone;
6. Ladders, vines, and fire can no longer be placed on a block of Powder Snow;
7. Added a hint for using the Spyglass;
8. Azalea can again be fertilized with a bone meal if it grows on a block of moss.

Now let's look at an equally important aspect of the update — bug fixes. In total, studio Mojang fixed 15 bugs. You can see the list of the main bug fixes in our opinion in the list below:

1. Now when the Skeleton turns into a Stray, players will hear the corresponding sounds;
2. The Wither will no longer be damaged by the block of Powder Snow;
3. The mobs such as Bees can no longer collect nectar from the bushes of sweet berries;
4. A bug was fixed due to which the bees could not get into the hive or nest;
5. Now the iron and gold ore will drop the correct block;
6. For joystick users, special tooltips have been added, such as:

Related News:
Caves and Cliffs (v2) Add-on 1.16+
We present to you another add-on that allows all players to test all
The Crazy Caves – Caves & Cliffs Add-on 1.16+
Would you like to diversify your Minecraft world in some interesting
Cave and Cliffs Concept Add-on 1.16+
Are you already looking forward to the upcoming Cave and Cliffs
The Caves and Cliffs Update - Release Date
In today's article, we will consider with you the date of release of
Comments (0)
Commenting