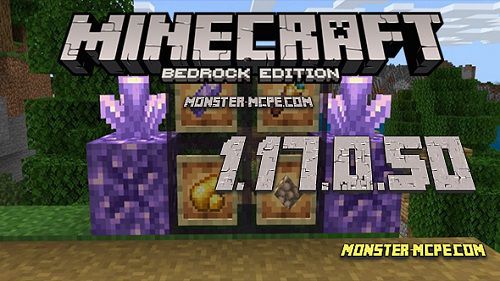 Wednesday for Minecraft fans is not only the middle of the week but also the day of the release of new updates! Today we present you a new big and main first test version of the update for Minecraft PE 1.17.0.50! This is a new update for Caves release. The Mojang developers have released a new update which is already available to all players who use the Android operating systems.

The new beta update for Minecraft Bedrock introduces a large number of new useful settings and features that will complement the Minecraft world with interesting things and blocks.

Let's take a look at all the new fascinating features of the beta update MCPE 1.17.0.50.

Please note that in order for players to test all the updates and features of the beta version, you must first activate the Experimental Caves and Cliffs settings!

The first thing we will look at is the new experimental features that were released in the new update!

Now with a new update, the new blocks have been added to the game the first one is an amethyst geode.

This natural structure looks like one large geode that is generated in different random locations underground but only in the Overworld dimension. Pay attention that the outer part of the amethyst geode consists of a material such as Smooth Basalt. 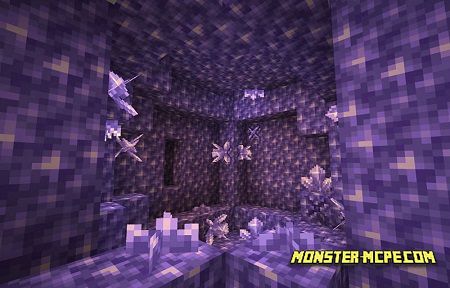 As mentioned earlier, such blocks of smooth basalt, which is the first layer of the amethyst geode, the next one is calcite, which is the second layer, and tuff were added to the game world.

In order for the players to get smooth basalt, for this, you just need to melt the basalt.

Let's take a look at other resource blocks below that have also been added to the game.

One of these blocks is the cluster of amethyst.

Where can I find it?

Finding this block is quite simple as it grows from a block as Budding Amethyst. This block can be found by players inside of amethyst geodes. 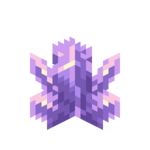 These blocks grow only if they were placed on the blocks such as bud amethyst. A full-fledged block of the cluster of amethyst can drop 4 shards of amethyst, in some cases, it drops more, but rarely. In order for the player to be able to break this block, you must use an iron pickaxe or a pickaxe of a higher level, otherwise, this block will not drop anything to you and will simply break.

Please note that clustered amethyst blocks can interact with a touch of silk at any growth stage.

The next thing we'll look at is budded amethyst. 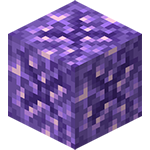 It should be noted that the previously mentioned bud, which is at a small stage of growth, will grow on either side of the bud of amethyst where there is a good source or access to air and water. It is also important to know that for proper growth, the buds of amethyst must be attached to the budded amethyst until they go through a full growth cycle.

We have already talked many times about the clusters of amethyst that will also be added to the game, let's take a look at its feature. Amethyst can appear in the shape of a block within a geode being budded or simply a block of amethyst.

When players walk or just move on top of the amethyst block (all types of amethyst even cluster ones), they recreate beautiful and pleasant sounds.

Also, such sounds can be heard when the player is breaking the block of amethyst, hit them using some kind of projectile, or simply place them. Discover new pleasant sounds!

The next type of block that is already available in the Minecraft world is tinted glass!

This is a new transparent full-size block that players will be able to use for the decoration, its main feature is that it is transparent but the light cannot go through it. 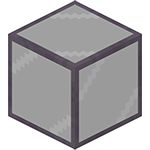 To craft such a block, you must use a block of glass and four shards of amethyst. Bear in mind this block will not break like ordinary glass.

And the last thing is a shard of amethyst.

As mentioned earlier, players can get the shards by breaking a cluster of amethyst from which the player can get four shards. 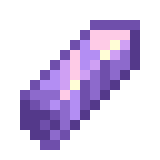 In addition to the blocks in the game, there are also some changes that have affected other aspects of the game.

One of these changes was received by the spyglass. Players can get this item using the ingots of copper and shards of amethyst. Pay attention that the view through the items camera is a little slow, this is done for more convenient use. Also, it is possible to adjust camera movements by using the special selector in the settings of the game.

The new raw types of metals can be found in the game. These raw metals that players can use to smelt can drop the same raw ore types. Please note that you can melt them in the same way as before. This is done so that players can use their inventory, saving space in it and using other more useful blocks. Now your inventory will not be heavily cluttered.

And the last one is Tuff.

This is a block that is generated below the Y = 0 level in mineral veins. 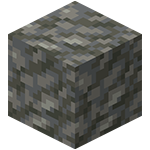 The next thing we will consider with you is bug fixes! In total, more than 60 different bugs have been fixed in the new update. Let's take a look at the most significant bug fixes below.

1. By catching an axolotl in a bucket, you will no longer receive a special achievement which is called Biologist of Marine;
2. Increased the percentage of axolotl spawn;
3. From now in the mines the web will not hang in the air;
4. Now oxidation of copper surfaces after the lightning stuck will occur randomly;
5. Players can use Cobbled Deepslate as additional material for crafting;
6. Currently dripping stalactites fill the cauldron faster;
7. Random generation of biomes of Lush Caves underground;
8. The sound was added for moss carpet placement;
9. Formations such as stalagmites/stalactites immersed in the liquid will not grow;
10. While using the bone meal, players may hear distinct sounds;
11. Also, the developers have added the sounds for natural processes related to the player, namely during the burning of character, drowning, or freezing;
12. From now the block like powder snow is also available to players using the Creative menu;
13. The mobs like foxes can stand and walk on the top of the blocks of Powder Snow;
14. From now the players can find the glowing lichen in the Creative menu;
15. A bug related to the use of the command: / stopsound, has been fixed. Previously it could lead to the crashing of the game;
16. Using an ax on a block of wood turns it into a stripped block of wood;
17. Now the particles of a critical strike will appear not under the mob, but around it!

Related News:
One Way Glass Add-on 1.16+
Do you use glass blocks? If you do, then you will definitely like the
Minecraft 1.17: The Caves and Cliffs Update
Greetings to all fans of the Minecraft world. Today we'll tell you
Minecraft PE 1.19.0 for Android
You probably already saw our article about what awaits players in the
Cleaner & Connectable Glass Texture Pack
This pack gives adds modern design for your glass texture, make it
Comments (0)
Commenting