During your adventure, players can see both large and small ships with pirates on board. Pirates are always ready for battle and always hostile, so be careful, as pirates protect their looted goods. Please note that players should not stand aside, you have to attack such ships with pirates and conquer ships with loot.

Do not underestimate the pirates, you must be well prepared before embarking on a dangerous new adventure. The new add-on adds two types of pirate ships to the Minecraft world with different loot on each of them.

Also, in addition to ships, new types of weapons and, of course, pirates will be added to the game! Let's take a look at the features of the new add-on below.

As mentioned earlier, the new add-on allows players to get into the real world of pirates where they will have to fight pirates and capture ships with loot. The new add-on adds two types of pirate ships to the Minecraft world with different loot on each of them. Also, in addition to ships, six types of weapons and five types of pirates will be added to the game.

Let's first look at the new mobs, namely the pirates who will always be hostile and ready to defend their treasure on the ship. The pirate crew consists of such crew members as the captain, commander, duelist, swordsman, and marksman. Four of the crew members use melee weapons for battle, namely sabers, as opposed to the gunner who in turn uses flintlock firearms. 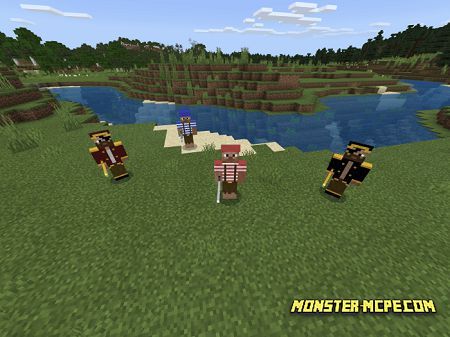 Please note that each mob has certain health points (each mob is different), and different damage. The higher the rank of the mob, the more health and damage it has. 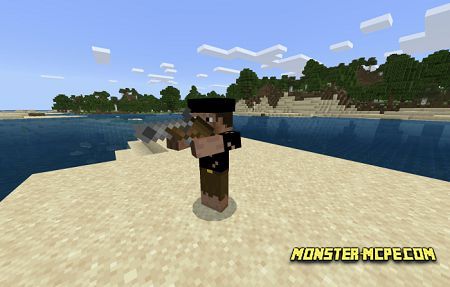 The next are the weapons that players can use to fight pirates. As mentioned earlier, the new add-on also adds six new types of weapons, each of which players can create using such materials as stone, gold, iron, wood, Netherite, and diamond. 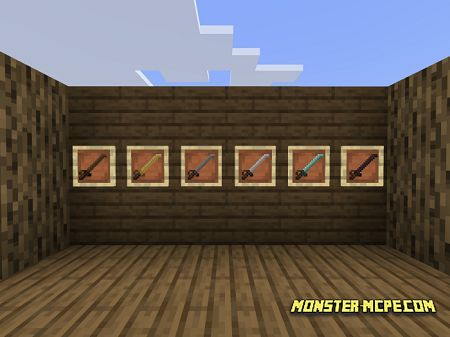 For a better experience in battles, players can use new sabers that allow players to move faster than they did with a sword before. Sabers are a lighter version of heavy swords, but at the same time, they can do more damage than simple heavy swords. 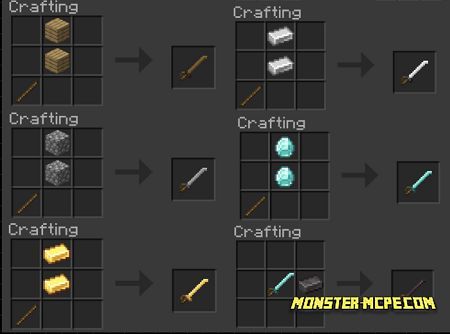 The only drawback with the saber is that it cannot be enchanted or repaired. Below you can see all available crafting recipes for new weapons:

Ships are a place where players have to fight pirates and take all the loot from them. Please note that small ships have less loot than large ships. Small ships have a specific feature, namely a black sail with a white skull. While on larger ships you will find more loot and white sails. 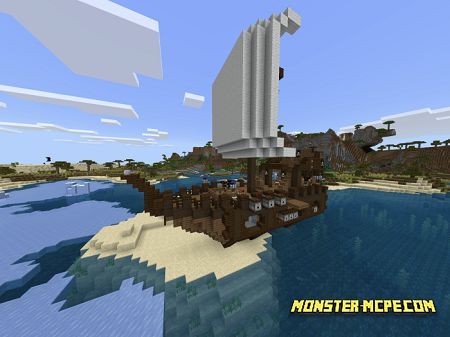 The new add-on adds a new weapon to the Minecraft world, namely the Flintlock firearm. In order for the player to get this type of weapon, it is necessary to kill the shooter pirate. Please note that this is a very powerful weapon that deals great damage to your target. 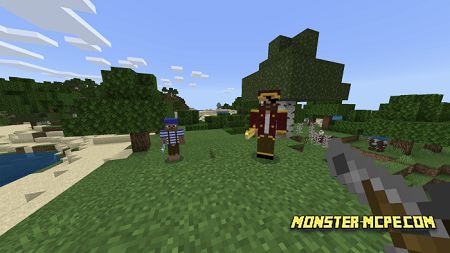 The main feature of this weapon is not only that it is very powerful, but also that this weapon has no restrictions on use. But of course, there is one small drawback, this weapon cannot always shoot accurately at the target, so be careful when using it.

Related News:
More Tools Add-on 1.16+
Has it ever happened that you have a lot of resources in your
Cave Enhancements Add-on 1.16+
We present to your attention a large and fairly voluminous Cave
Pirate’s Adventures Map
Would you like to become a pirate? If so, then you have such an
Terraria Pirate Captain Boss Add-on 1.15/1.14+
Would you like to add a new rival to your Minecraft world? If so,
Comments (0)
Commenting