We present to your attention a large and fairly voluminous Cave Enhancements add-on with a lot of new unique content. Using the new add-on, players completely change their idea of the usual dungeons and caves of the Minecraft world. This add-on is so big that in total, more than 300 new items, new cave locations, fifty new types of ores, new torches, and much more will be added to the Minecraft world. Please note that this add-on is not related to the Cave Update.

The new add-on is a new opportunity to get a unique experience in survival in a new world with new improvements and a large number of unique Minecraft content. Let's take a look below at what awaits you in the new add-on. We recommend that you read the description of this add-on since many new items can affect your gameplay, for example, the weapon of which there will be more than two hundred in the Minecraft world.

The first thing we will look at is the caves. This is the most interesting and perhaps one of the most significant gaming aspects of this add-on since your entire adventure will take place inside these interesting and beautiful caves. The new generation of caves allows players to explore a new underground cave world with a lot of new resources and materials.

In the game, you will see how large the caves can be and what awaits you there. As mentioned earlier, this add-on has nothing to do with the Cave update, but nevertheless, the similarity of the caves is noticeable, which is also good because you can already get valuable experience and explore familiar places right now. Below you can see what these large caves look like: 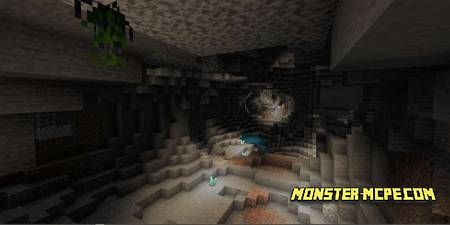 In addition to the simple caves in the game, you can also explore places such as cave biomes, each of which has a unique design. In general, three cave biomes will be added to the Minecraft world.

The first cave biome is called Desert. In the world of Minecraft, players can find this place in the desert dungeons. Added new material such as sandstones. In addition to sandstone in this cave, players can find a large number of different ores and other materials. Below you can see what the desert cave looks like:

The next type of cave biome is Snowy. From the name, it is probably clear that this biome is located in snowy dungeons, namely, under the ground of snowy plains and tundra. This place is quite dangerous as there are blocks of snow and ice, stepping on which you can fall through and fall into the lava. Players can also create secret passages using a new block called slush. Here, as in any other cave, you can also find useful and valuable materials for survival. Below you can see what the snowy cave looks like: 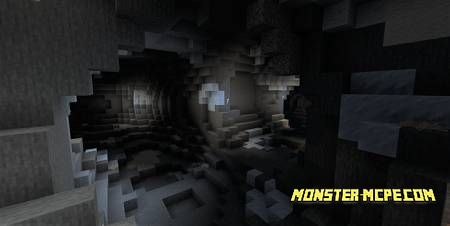 The third type of cave is the Jungle.

Attention: Please note that this cave may require a fairly good performance from your device, otherwise the game may lag a little. This is due to the fact that there is an advanced generation in this place. You will see a lot of mud and plants here. Below you can see what the jungle cave looks like:

And the last unique cave is the cave called End. This is the place where you can explore the deepest parts of a location like the End. After killing the dragon there is nothing else to do in this place ... This add-on changes everything and from now on that, you have the opportunity to explore new caves in the deepest places of the Minecraft world. New ores and new opportunities await you. Below you can see what the End Cave looks like:

In addition to the caves in the game, you will also be interested in new structures that will also be located in new caves. For example, a new dungeon in which players can face any existing mob in the Minecraft world. Even the Creepers live here! This is the place where you can fight various hostile mobs, so be careful. 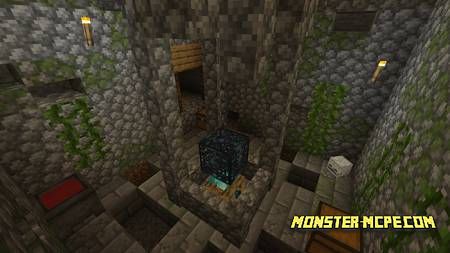 Another unique cave is the Crystal Cave. This is truly the most unique and exciting cave, as here players can find a large number of different crystal blocks and beautiful underground rivers. Here you can find, in addition to crystal blocks, such places as a small dungeon, beautiful rivers and geysers, and even a small library. Here players can find unique and very valuable loot that will help them in further survival in the caves. (Please note that this cave can cause strong lags at the time of generating blocks or items!).

As mentioned earlier in the new caves, players can also find a large number of newly added different types of ores. In general, fifty new types of ores will be added to the Minecraft world, some of which will be generated in the Nether world, in the overworld, and in the End. Each ore has its own purpose for any action. In other words, all ores will be used by players when crafting any new items. In this add-on, all new ores so far can only be used to craft new weapons and tools. Also, all new ores have an interesting and unique look. Below you can see a wall showing all the new ores: 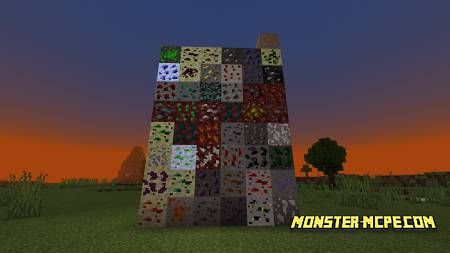 In the world of Minecraft, players will be able to find some new ores not only on the ground or underground but also under water! While sailing across the ocean, players can see the ocean floor glowing, which means that new ore is waiting for you there. In general, under water players can find three new ores, each of which you can also use for crafting. It is not that easy to mine ore underwater, but you should definitely try it. Below you can see how they look in the Minecraft world under water: 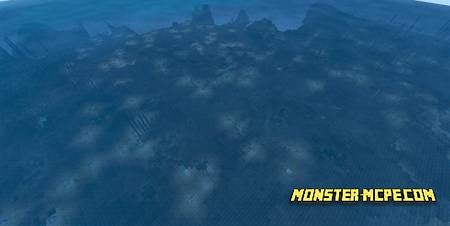 Now let's take a look at the most interesting, of course, Weapons, armor, and tools! If you want to look at all the new items of weapons, tools, and armor, then use the creative game mode. New weapons such as swords, axes, sickle, and hammer can be found in the sword section. Using the crafting table you can see all the new crafting recipes. Below you can see what all the new items look like: 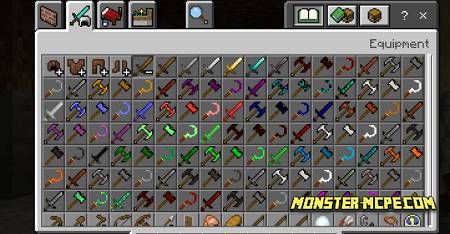 One of the most important and frequently used tools in the Minecraft world is the pickaxe. This tool is essential for players to mine ore, as well as many other blocks. The new add-on adds nine new types of picks. Each new type of pickaxe allows players to mine one of the new types of ore that will be useful to you in your future survival. Below you can see what the new picks look like: 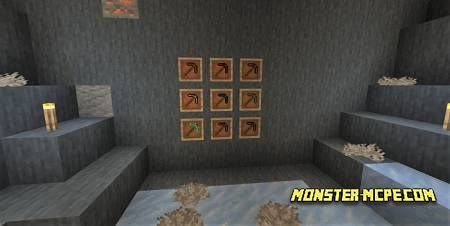 How can you go on an exciting new adventure without good and reliable armor? Of course, you cannot, as it is deadly. That is why players can equip themselves with new armor that will be added to the world of Minecraft. In total, five new types of armor will be added to the game. Players can craft each new type of armor using the appropriate material. Below you can see what the new armor sets look like: 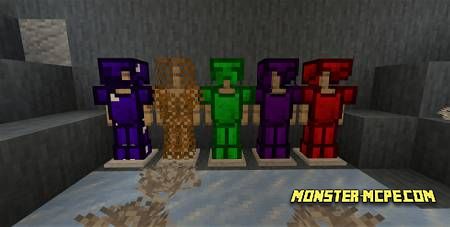 In caves, players can easily find simple grass that grows inside each cave. Grass allows players to use a temporary source of fire or light as it can ignite when interacting. Please note that the grass does not burn so long.

When exploring new caves, you will probably need a reliable light source to help you light up the darkest corners of the caves, such as a torch. In this add-on, players will be able to use the new features of the torch, namely, use it in the dark so that the light up from the torch will light up the territory surrounding you. Below you can see how the torchlight affects the surrounding area: 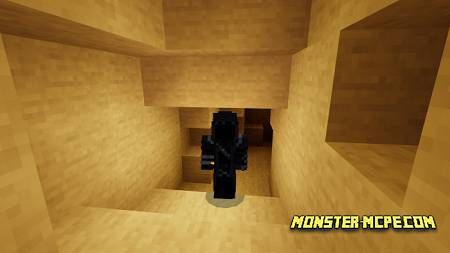 In different places of the Minecraft world, players can find roots that are generated inside grass blocks. These roots allow the player to obtain and use potions, bone meal, and seedlings. Below is a screenshot of how the roots look: 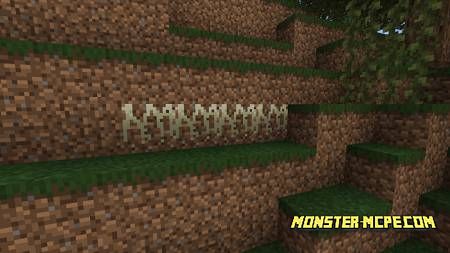 Not all devices can support the performance of this add-on, which is why you can choose the version of the add-on that is comfortable for you below. Especially for devices with low performance, the same add-on was created but with more limited features, for example, a smaller cave. Using an add-on for low-end devices with low performance, you can not be afraid of the game, as it allows you to play with high stability.

Attention: Please note that prolonged loading is not a glitch, it is a normal process. Due to some problems on the part of the Mojang developers, bugs such as incomplete generation or stoppage of generation after the player leaves the game are possible. Also, the aforementioned long-term loading.
Facebook
Twitter
Pinterest
Cave Enhancements Add-on 1.16+
cave-enhancements-rp.mcpack
Download free[3.16 Mb]

Related News:
Jurassic Addon
Jurassic Addon - this is a fairly large and voluminous addition that,
Mo’Dungeons Add-on 1.16.40/1.16+
Would you like to explore new dungeons and locations? If yes, and you
Minecraft 1.17: The Caves and Cliffs Update
Greetings to all fans of the Minecraft world. Today we'll tell you
Minecraft PE 1.18.0 for Android
We present to your attention the new version of Minecraft Pocket
Comments (0)
Commenting