Do you like PvP battles with players? Do you want to have fun with your friends? If yes, then the new Bedrock Box PvP map is what you need. This is a new PvP map for you and your friends. The fast-paced game allows players to have fun fighting each other. Here, the main task of each player is to mine cobblestones, improve their items and equipment and protect their bed so that no one destroys it.

Fight and defend your bed, not forgetting that you need to get a cobblestone to improve your armor.

Let's take a closer look at the features of the new map below.

As mentioned earlier, the new map allows players to have fun fighting each other. The players have several main goals, namely the main one, it is to protect their bed and try to destroy the opponent's bed, as well as mine cobblestones and improve their equipment. This map is intended for PvP from two to eight players. All players will spawn in a large box that consists entirely of stone.

As mentioned earlier, the player's main resource is cobblestone. Get as much cobblestone as possible so that you can trade with a villager and get useful items.

In order for the player to win this battle, the most important thing is to survive and destroy the rivals' bed.

Below you can see a screenshot of the trade with the villager: 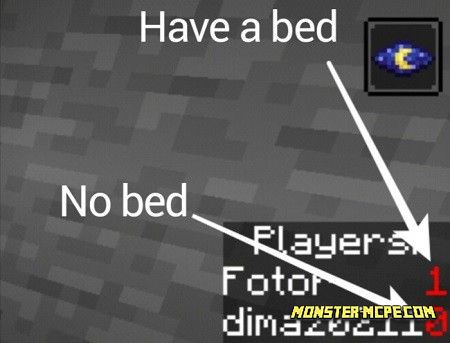 In case you get killed, just wait a bit and you will respawn.

Attention: In order for your game not to crash, we draw your attention to the fact that after starting the game, you should not leave it.

Related News:
More Tools Add-on 1.16+
Has it ever happened that you have a lot of resources in your
Golden Utilities: Transport Any Mob and Much More Add-on
Have you ever faced the problem of transporting mobs or maybe you
Socketed Armor Add-on 1.16+
Would you like to add new armor sets to your Minecraft world? If yes,
Cave Enhancements Add-on 1.16+
We present to your attention a large and fairly voluminous Cave
Comments (0)
Commenting