Have you ever heard of an event like the Minecraft Championship (MC Championship / MCC)? If yes, then you know innocently what this event is for the Minecraft community, if not, then this is a special event where Minecraft content creators are participating. One of these creations that were previously presented at this event was copied and is now available for you in your Minecraft world. The new Battle Box map is a recreation of the famous PvP map for you and your friends. Let's take a look at the features of the new map below.

The first thing you will see is the center of the new map since this is where you spawn and see below what the scheme of the new mini-game looks like.

To start, press the button in the Lobby after which the player will be moved to another room, where he will have to choose the color of the team for which he wants to fight. The game features two teams, one blue and the other red, choose the one you want. To choose a team, just cross the dividing line and step on a special prismarine block that is located in the corner of the team's side. 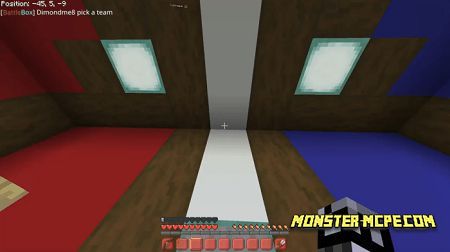 After the player has chosen the desired team, he will be moved to the next room that belongs to your team. The next room is where players will have to choose a set with which they will fight, whether it be an archer with a crossbow, a warrior with a special knockback sword, a pot of health, and a pot of harm!

After you have chosen a weapon and a set, you will be transferred to your team's room (but after all the players have done the same, namely, they have decided on a set for the battle and a side for which they will fight). To start the game, both teams must press special buttons located on the wall!

The battle between the players will take place on a bridge under which water flows, this is a kind of waterway. During the battles on the battlefield, bushes and docks can help you, which can give experienced players a slight advantage while moving. But in order for it to be an interesting and pleasant fun experience, you must not hide, but actively fight!

Please note that the minimum number of players is from two to eight.

Related News:
Fishing Rod PVP Map
Do you like addicting and funny mini-games? We are sure so,
Cave Enhancements Add-on 1.16+
We present to your attention a large and fairly voluminous Cave
Jurassic Addon
Jurassic Addon - this is a fairly large and voluminous addition that,
10 Command Creations Map
We present you with a new fascinating map on which you can find ten
Comments (0)
Commenting