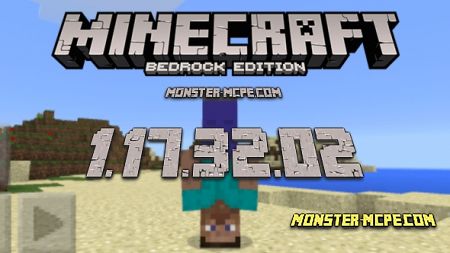 The developers have released a full version - Minecraft 1.17.32.02 on Android. The update fixed 7 bugs and improved the stability of the game.

Immediately after the test version, the developers decided to publish a full version for important fixes.

Fixed bugs
Fixed 7 bugs. Read more:
Fixed crashes during the game
Fixed crashes due to the In-game Marketplace sidebar
Fixed a bug with downloading content
Fixed a bug with the player spawning on the surface due to a light block
Killing mobs with a projectile with a "Prey" enchantment now works correctly
Fixed an error loading the world on Nintendo Switch
Fixed the generation of a flat world when the Caves and Cliffs mode is turned on
Old worlds update correctly

Related News:
Village, Ravine & Flat Landscape Seed
Very fascinating seeds that spawn initially near the village, it is
Caves and Cliffs (v2) Add-on 1.16+
We present to you another add-on that allows all players to test all
The Crazy Caves – Caves & Cliffs Add-on 1.16+
Would you like to diversify your Minecraft world in some interesting
Cave and Cliffs Concept Add-on 1.16+
Are you already looking forward to the upcoming Cave and Cliffs
Comments (0)
Commenting