Not so much time has passed since the recently held Minecraft Live 2020 event, as the developers of the Mojang Studio are already ready to present us with the long-awaited innovations along with the new test version of Minecraft PE 1.16.200.52! In the new beta of Minecraft Pocket Edition 1.16.200.52, the long-awaited innovations from the Caves & Cliffs announcement have been added, namely Mountain Goats and Powder Snow.

But before we look at the new beta version with all the innovations and changes, we will answer you a question that must have come to your mind: Why are Caves&Cliffs update to become part of the update in Minecraft Pocket Edition 1.16?

The fact is that the Mojang developers decided to add the first Cave changes already in this version 1.16. Everything turned out to be much easier. Since the upcoming update has aroused such great interest from a large number of players, Mojang decided to work on starting to gradually introduce new content into the Minecraft world and, by the official release date, provide players with a fully functional new world without any bugs and glitches.

In order for you to activate the new features, enable the Experimental game mode with the Caves&Cliffs option in the Map Settings. In the new update, players can see new animals in their Minecraft worlds such as Mountain Goats, also a new type of snow such as powder snow, and a pretty big number of different bug fixes. This update has a fairly large number of bug fixes, in total, Mojang fixed 53 bugs!

Let's start with the most interesting thing, namely Mountain Goats.

What do we already know about the new animal, namely the Mountain Goats?

This is of course a new mob that will temporarily spawn in the Mountain biome until it gets a new home.

These creatures are also called Mountain Kings, as they move very dexterously and quickly through the mountains. These animals have reduced fall damage. Mountain goats can jump at unexpected moments. They can also push other creatures, for example, the player, from the mountain. They drop the Horn if they hit a tree. 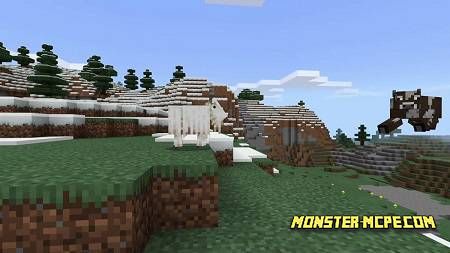 This is truly unique snow and really something new, as it is snow that players can drown in. Temporarily available only in the Inventory of Creative. There is no fall damage. A new type of snow can be used by players as a new trap, as it can suck in the player and let it pass through himself. In order for the player to stay above the snow and not fall through, you need to put on leather boots.

With leather boots, you can easily walk on powder snow. Beforementioned animals such as mountain goats bypass this snow. The texture of powder snow is different from normal snow. If the player gets inside the snow, he will see the texture of the fog. 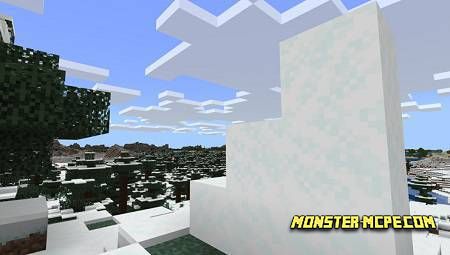 Now let's take a look at the new bug fixes below.

As mentioned earlier, in total, Mojang fixed 53 different bugs, but we will tell you about the most significant ones:

Related News:
The Caves and Cliffs Update - Release Date
In today's article, we will consider with you the date of release of
Minecraft 1.17: The Caves and Cliffs Update
Greetings to all fans of the Minecraft world. Today we'll tell you
Mountains Concept Add-on 1.16/1.15+
Do you often explore mountainous areas? If not then a new addon will
Minecraft 1.17.0 for Android
We present to your attention the announcement of the upcoming update
Comments (0)
Commenting