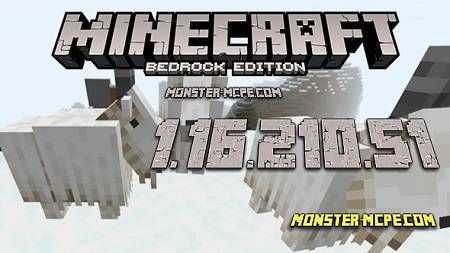 Developers from Mojang Studios have fixed some bugs and made a lot of changes. For example, from now, baby mountain goats do not jump as high as their parents.

And with the reproduction of these creatures, from now on you can get only one cub.

In the new mountain update in Minecraft 1.16.210.51, there is a new biom generation. The mountains have become much more realistic and the slopes have become steeper. This gives a more pleasant look to the mountain areas.

Along with the new generating mountain biom, mountain goats appeared, as well as powder snow.

This mob can only be found in mountain biomes in Minecraft PE 1.16.210.51. Mountain goats do not like guests, so they can butt players and throw them back on several biomes. Because of that all this is happening in the mountains, player can die from falling from a hight.

Mountain goats can also be propagated. To do that, player should use wheat. You can get only one cub at a time. 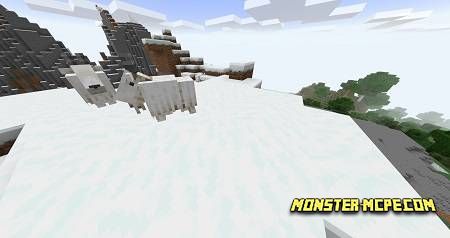 Additionally, player has the ability to tie this creature with a lead. There is also appeared a new item in Minecraft 1.16.210.51 - a Goat horn. 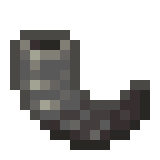 It drops out when a mountain goat smashes in any solid block. The goat's horn does not have wide functionality. You can only make sounds that are played when pillagers attack the village.

There is also a new thing in Minecraft PE 1.16.210.51 called Powder Snow. It differs from common snow, you can fall into it.

At the same time, the player movement slows down, and snow fog begins to appear around. 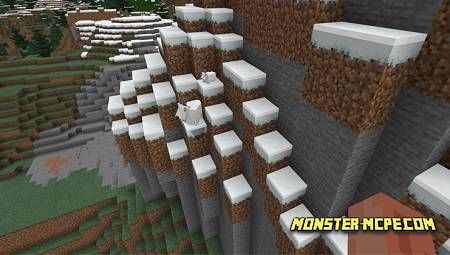