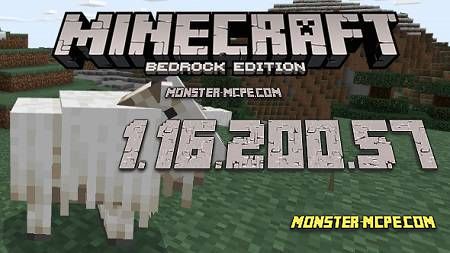 The developers from Mojang decided to delight users with new global update of Caves & Cliffs. Moreover, there are more very interesting innovations in Minecraft PE 1.16.200.57.

Powder snow is new, previously unseen block in Minecraft 1.16.200.57. It spawns randomly in the mountains, but it can also be collected with a cauldron in the open air. For collecting it, player should use a bucket.

Players and other clumsy mobs can fall through the powder snow. So, evil players can build dangerous traps from this. Movement on this blocks is possible only in leather boots. 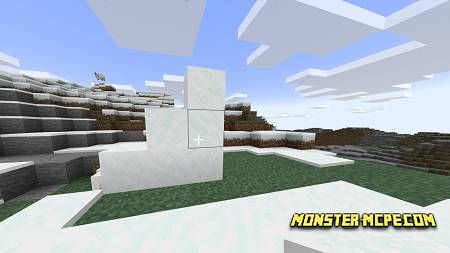 About heights, it's worth noting that goats can push you off it. These mobs live in snowy mountains, where, by the way, they skillfully do not fall into powder snow. They also are very jumpy.

The average goat can jump 4-5 blocks in height in Minecraft 1.16.200.57. At the same time, you shouldn't get too close to them. They can push you or other mobs away.

Their hits are strong, so it will throw you far. 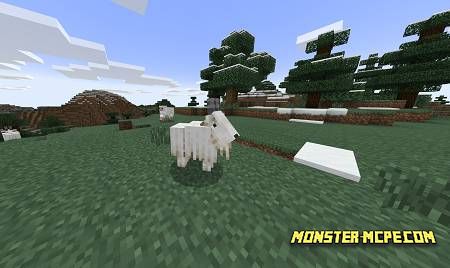 If a mountain goat accelerates and crashes into any block, the horn will drop out. This thing can be used in Minecraft PE 1.16.200.57 in order to scare friends and residents.

Goat horn makes a raid sound. It is the only thing for which it is intended. As a reminder, to access all of this features, you need to enable the "Caves & Cliffs" option in the menu of Experimental Mode.

After that, you create a new world, or visit a part of the map where, you have not been yet and new content from Minecraft 1.16.200.57 will begin to generate. 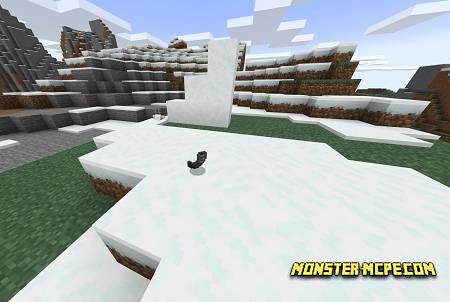 Related News:
The Caves And Cliffs Update introduces lots of Snow And Goats!
We are in a hurry to present to you the latest news from the world of
Minecraft PE 1.16.200.52 for Android
Not so much time has passed since the recently held Minecraft Live
Minecraft 1.17: The Caves and Cliffs Update
Greetings to all fans of the Minecraft world. Today we'll tell you
Mountains Concept Add-on 1.16/1.15+
Do you often explore mountainous areas? If not then a new addon will
Comments (0)
Commenting