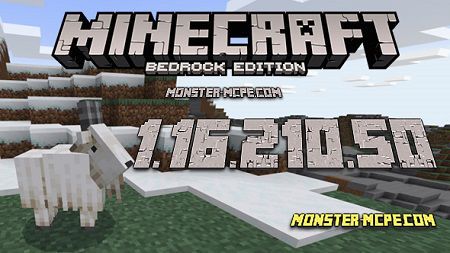 And again, we are gladly ready to present you with a new beta version of Minecraft PE 1.16.210.50 for Android devices. In the new Mojang, various bugs and crashes were fixed, sounds were added to the Nether world, and much more. Let's take a look at the new beta update below.

Known bugs include a bug that occurred in multiplayer sessions. Some players were unable to access their Realms servers. In Minecraft Pocket Edition 1.16.210.50 this problem has been fixed.

Also, from now on, players can control sound settings more precisely. Previously, players only had two sound customization options available. In this update, players can individually customize mobs, blocks, music, weather, and other game aspects. This feature allows players to avoid a situation where, due to the quiet sound, you will be trapped by a creature such as Creeper.

Another feature of this update is a previously unseen and unique block called Powder Snow. This type of block differs in that all mobs and players without leather boots will fall through it. Also, walking on it, the players' movement speed decreases. As mentioned earlier, a player wearing leather boots (of any color) can walk on a block of powdered snow without any difficulty. The only benefit of this block is that if you fall on such a block from a height, you will not lose health. We also draw your attention to the fact that players can use this block to create various traps. 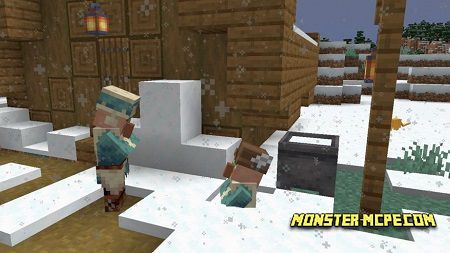 The main feature of the MCPE 1.16.210.50 update is, of course, the mountain goat. This mob lives in high snowy mountains. In the mountains, goats can be found in groups of four or more mobs. At the same time, we recommend that you do not get close to them, as these mobs will defend their territory. They can push you off a cliff. Moreover, mountain goats can push back the players, because of which you can fall down from the cliff. 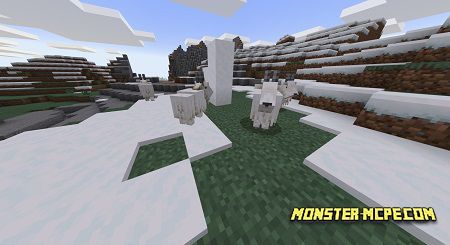 These animals can drop a new item called goat horn, in addition to wool and meat. Please note that players can also milk goats.

The aforementioned goat horn can be used by players to recreate the raid sound. Using this item, players can scare both friends and villagers.

A large number of different sound problems have been found in the Nether world. In the new Minecraft PE update 1.16.210.50, the environment sounds have been fixed. For the changes to take effect, you need to do the following:

Go to the Marketplace and install the Minecraft Original Music Pack!

The Mojang developers continue to improve the updated achievement screen. Five changes have been added, three of which you will see below:

In general, four bugs have been fixed:

1. Fixed connection to servers with draw distance less than 4 blocks;
2. Fixed animations of custom mobs;
3. Fixed the ability to re-connect to the server;
4. Fixed the compatibility of the voiceover of the text and the Achievements Screen.
Minecraft PE 1.16.210.50 for Android
minecraft-1-16-210-50.apk
Download free[113.07 Mb]