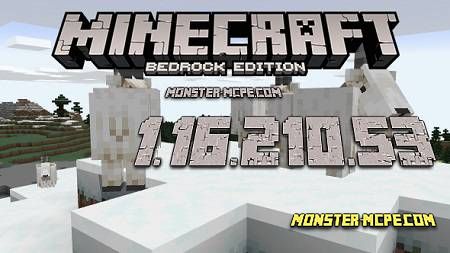 Friends, a new beta version of Minecraft 1.16.210.53 for Android has been released. In this update, there are some bugs fixed and improved Snow. A total of 14 bugs fixes, 25 gameplay changes were made. Complete list:

- Snow lets out particles when someone inside a block or jumping on it
- Players and mobs in the Snow will slowly freeze
- Effect of freezing is removed from burning players and mobs
- The freeze effect can be turned off
- Mobs may go in Snow
- Burning mobs and players are extinguished when falling in snow
- Torches, Redstone dust, item frames can't be placed on Snow
- Sand and other blocks will not break from falling on Snow
- Fixed the third-person view in the snow
- Fixed spawning mobs in snow
- Snow removed from the creative inventory
- Snow in not stopping projectiles
- Light mobs may walk on Snow
- Rabbits, silverfish and endermites do not fall through the snow
- You may choose certain blocks that mob must stay away
- Goats are staying away from Snow
- Fixed footsteps in the snow
- Fixed a bug when leather boots did not allow walking on Powder Snow
- Added unique sounds for Powder snow
- Added fog and frost to the screen if player is inside of the snow
- To carry Powder Snow you can use a bucket
- Changed textures of Powder snow
- Now you moving slower through the snow
- Removed damage from falling
- Fixed texture errors for nearby blocks 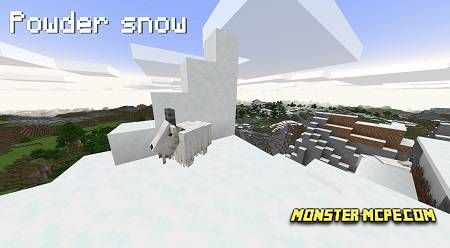 - Some sounds are fixed in Nether
- Update Music Pack in the Marketplace to update sounds
- Shulker's box do not loses its contents after interacting with the cauldron
- Changed logic for mobs dismounting rideables
- Player will not get out of a boat while in lava and water
- F11 now activates fullscreen
- If authorization fails, a detailed response of the error appears
- Bonus in treasure chests now depends on the seed.
- Fixed a bug when double chests became invisible
- When golden apples are selected they have colored text in the quick bar
- Some parameters added for / fill, / setblock and / clone commands
Facebook
Twitter
Pinterest
Minecraft PE 1.16.210.53 for Android
minecraft-1-16-210-53.apk
Download free[112.94 Mb]

Related News:
Cave Enhancements Add-on 1.16+
We present to your attention a large and fairly voluminous Cave
Minecraft PE 1.16.210.50 for Android
And again, we are gladly ready to present you with a new beta version
The Caves And Cliffs Update introduces lots of Snow And Goats!
We are in a hurry to present to you the latest news from the world of
Invisible Item Frames Resource Pack
Invisible Item Frames texture pack make the world of MCPE much better
Comments (0)
Commenting