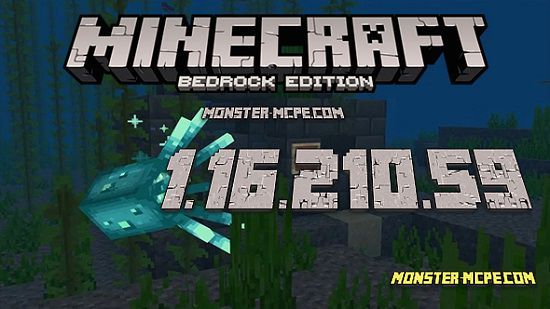 And here is the new beta update for Minecraft PE 1.16.210.59, this is the new ninth version for the Bedrock Edition 1.16.210 update, released today by the developers of Mojang. This update will be very interesting to you just because a new mob has been added here, namely Glow Squid, Glow Ink Sac, and other innovations in the experimental gameplay, as well as some bug fixes. This test version is available to all users of devices using the Android operating system. Let's find out below about all the features of this update.

The first to whom we will draw your attention is the new and most importantly long-awaited mob Glow Squid! It is a unique new type of octopus with a glowing luminescent texture. At the moment, this mob can only be spawned with a spawn egg in Creative mode.

Glow Squid often emit particles that float randomly in the water, like normal squids. These mobs also take additional damage when using a weapon with the Impaling enchantment. 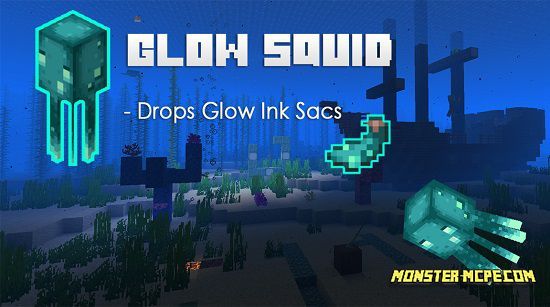 Wardens will always be hostile towards these creatures, just like the axolotls. Upon hitting land, these mobs continue to play their swimming animation, however, they will not be able to cover the distance more than one block, and they also begin to take suffocation damage over time.

When some hostile creature attacks the Glow Squid, it stops glowing for a hundred bars (or five seconds) and swims away at a higher speed than ordinary octopuses.

The new type of octopus will be stationary if the player is in Spectate mode or at a sufficiently large distance. In this state, the mob will not float away even after taking damage.

As mentioned earlier, new octopuses do not spawn naturally yet, you can spawn with a spawn egg. Drops Glow Ink Sac upon death.

What is Glow Ink Sac?

As mentioned above, this is a new item that is dropped after the death of a new type of octopus. Players can add this item to the sign to make the text on its glow or create a glowing frame from it. To get it, combine a simple frame and new ink in the crafting table.

Please note that you can remove the effect from the plate with simple ink, and the text on the plate can now be painted with dyes. 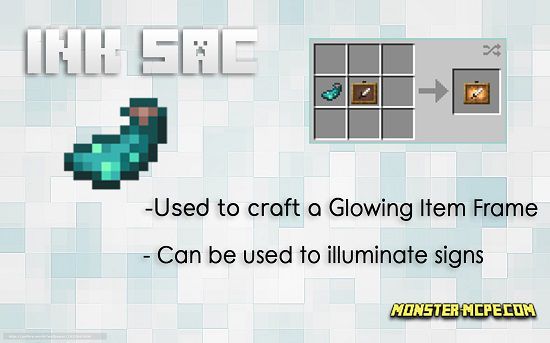 And the last one is bug fixes!

In total, 23 bugs were fixed in this update. The most significant bug fixes are listed below:
1. Improved text-to-speech function;
2. Fixed a number of critical bugs;
3. Fixed crashes when exiting the Minecraft world;
4. Fixed damaged biomes on maps from the Marketplace;
5. Fixed bugs due to which the commands in the command block were replaced with the # symbol;
6. Fixed a bug due to which the drop from the blocks was interrupted;
7. Update description will no longer appear more than once;
8. Fixed bugs of the game interface;
9. Fixed display of fog in the Nether world.

Related News:
Minecraft PE 1.16.210.55 for Android
As the developers at Mojang have started working hard this year to
Cave Enhancements Add-on 1.16+
We present to your attention a large and fairly voluminous Cave
Minecraft 1.17: The Caves and Cliffs Update
Greetings to all fans of the Minecraft world. Today we'll tell you
A Simple and Normal Parkour Map
Would you like to just have fun playing simple but very addicting map
Comments (0)
Commenting