Wow, the new version of Minecraft Bedrock Edition 1.15 has been released. Will we finally see Minecraft Nether Update for Android? Unfortunately no, this version is available for all Android devices and gives players a large number of new ones, but this is not the very long-awaited Nether Update.

In more detail, let's consider the new update below.

What is new in Minecraft Bedrock Edition 1.15?

Nether Update? No, unfortunately, this is not the Nether Update. This is a new update that the developers of the Mojang studio presented to the players as an update that focused on Java Parity & Bug Fixes. Now we know for sure that the release of the long-awaited Nether Update will be in Minecraft version 1.16.

What are Java Parity and Bug Fixes?

1. Let's find out with you what Java Parity means. This is the equality of the versions of the game Minecraft Java (PC version) and Bedrock (mobile version). This is very convenient since when the developers of the Mojang studio make the version of the Minecraft Bedrock game more similar to the PC version of Minecraft Java, new releases will be released simultaneously, and we will receive high-quality and timely content;

2. As you can already understand from the name of Bug Fixes, this is work on fixing various bugs. We all know that performance in Minecraft Bedrock is a big problem. First of all, always remember that having no bugs in the game does not mean that other players will not have them, or vice versa, where one player can have everything without any problems, you may get an error.

Of course, we all know and understand the difference between Minecraft Bedrock and Java. And so that in the future there would be no problems with updates and the whole process, the developers decided to get rid of this difference. From now on, Bedrock and Java will be the same!

Now let's look at the innovations of the game!

The first thing we should tell you about is 3D models. This is a very interesting feature that allows players to see dropped items in the 3D model. We remind you that previously you could only see 3D block models.

Enchantment Curse of Binding I

What is it and how does it work? This enchantment has been added to the Minecraft world with the release of the new Minecraft 1.15 update. Using this enchantment, the player can enchant armor, pumpkin and even elytra. To do this, you need a special book, or just use the /enchant Steve 27 or /enchant Steve binding commands.

Another feature that makes the Minecraft PE game more similar to the Java version of Minecraft is the interaction of the boat and the cactus. After the boat is as close as possible (or on it) to the cactus, it will begin to shake and then break. 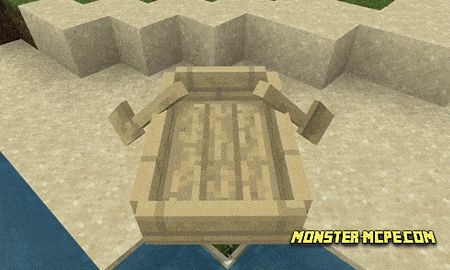 Added new blocks from Education Edition that limit the actions of players. Let's take a closer look at them:

1. Border: This block does not allow the player to pass under it or over it. You can try to trick the block and use Ender Pearl which will emit particles. Use the /give @s border_block command;
2. Deny: This block will not allow you to place or break anything above it; Use the command /give @s deny;
3. Allow: Above this block, you can both put and break other blocks. Use the /give @s allow command.

It doesn't work in Creative mode! 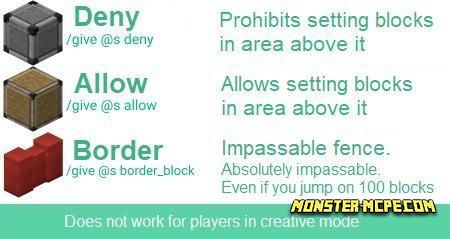 This is a mob, or as everyone used to call it NPC mob is a non-player character that looks like a villager.

Players can spawn this NPC mob using a special spawn egg or the /summon minecraft: npc or /summon npc commands;

They have their own features, for example, they do not move at all, are invulnerable and do not have any special behavior.

Useful: NPC mobs have a customizable interface. You can change:

— Name of the mob;
— Dialog Windows, namely the displayed text;
— Appearance. 20 different options are available;
— Advanced settings. Activation of command during the interaction, or after pressing a button.

In the Character Editor, you can see the new movements of Steve and Alex. This is a very interesting feature, because when you select an item, your character will yawn, and after saving an item, he will start dancing. 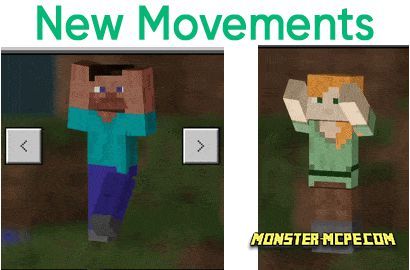 A huge number of errors were fixed in the game since the developers of the Mojang studio decided to completely deal with the fixes that were previously found by the players during the game process. Thanks to the hard work of Mojang, the game has become faster and more stable. In total, about 61 errors were fixed. Below we will show you those mistakes that in our opinion are the most important for the players:

1. Fixed the invisible Shulker Boxes;
2. Optimized the game client;
3. Fixed a large number of crashes;
4. Fixed crash when using Bone Meal;
5. Corrected the crash when a hive ignites;
6. Fixed repeated reading of text on the Xbox One;
7. From now on, the transition from water to land takes place more smoothly;
8. Using a fishing rod while running does not slow the player down.

As you already understood, the new Minecraft BE 1.15 update has nothing to do with Nether Update. Work has been done on an equality with Java and error fixing.
Facebook
Twitter
Pinterest
Minecraft 1.15.0 for Android
minecraft-1-15-0-56.apk
Download free[103.32 Mb]

Related News:
Soulsand Valley Concept Add-on 1.13/1.12+
A new addon that allows the player to travel the new Valley of Souls
Download Minecraft Java 1.15
We are glad to present you a new update for the PC version of
Download Minecraft Java 1.14
Everyone is looking forward to a new update for everyone's favorite
Minecraft Bedrock 1.8.0.10 apk free
Almost every player of Minecraft, already heard about new coming
Comments (0)
Commenting