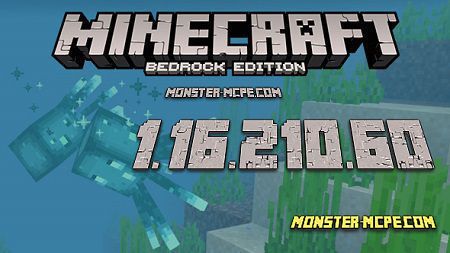 Just a few hours ago, Mojang presented to the Minecraft Community, and to all players in general, a new test update, namely Minecraft PE 1.16.210.60, with new unexpected fixes in the Minecraft world and other changes. This version is available to all users of devices with the Android operating system. Let's take a quick look at what's new in this test update.

As mentioned earlier, in the new update, the developers of the Mojang studio made a very unusual and unexpected, but at the same time the right decision, namely, to temporarily remove such mobs from the Minecraft world as Glowing Octopuses. But you may ask us why this decision is correct and just why? We will explain to you, the fact is that the new octopuses added in the previous update to Minecraft PE 1.16.210.59 caused a large number of different bugs and crashes of the game for a large number of players around the world.

That is why the developers of Mojang decided to temporarily remove this mob, find the problem, and after that present a correctly functioning creature to the Minecraft world. As you understand, in addition to the creature itself, everything that was previously associated with it will also be changed. Let's consider what exactly below.

What will be temporarily changed in the Minecraft world?

1. Glowing Octopuses removed from the Minecraft world;
2. Related items with the new octopus will also disappear from the chests;
3. The color of the dyed signs will be changed to black;
4. The glowing frames are removed from the game. They were also replaced with technical blocks. 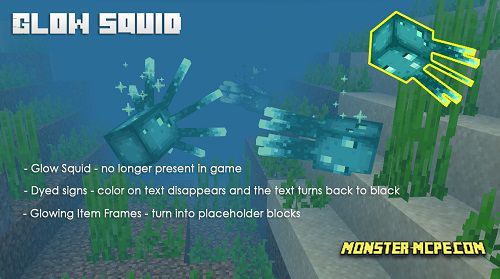 In total, this update has only eight new bug fixes. Below you can see some of them, which in our opinion are the most significant:

1. The error that occurred when loading the Structural Block with the Acoustic Sensor has been fixed;
2. Crashes when working with signs have been fixed;
3. A new screen of achievements is available to all players;
4. The bugs due to which the Character Editor did not work correctly have been fixed.

And the last thing we would like to draw your attention to is a new additional feature in the game settings, namely GameTest testing. It is a new framework and a new comprehensive testing solution. Please note that most players do not need it, but if you are still interested, you can explore the /gametest command and the new experimental Enable GameTest Framework option.
Facebook
Twitter
Pinterest