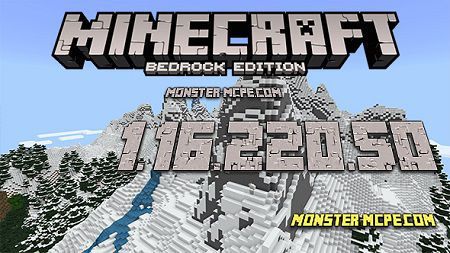 Just a few hours ago, Mojang released a new test update for phones with the Android operating system, namely Minecraft PE 1.16.220.50. In a new test update, the Mojang developers have updated the mountains and again added Glowing Octopuses to the Minecart world, increased the height of the world, and much more! Let's take a look at all the new features of the Minecraft PE update 1.16.220.50.

The first thing worth paying attention to is the updated mountains, namely the new generation of mountains and variations of mountain biomes. Now a new concept of a sub-biome will appear in the Minecraft world. New sub-biomes are places such as: In addition to biomes, there are many other changes in the mountains, a list of which you can see below:

The updated mountains will be up to 256 blocks high. Now players can even more useful resources in the mountains, all because Mojang added iron, coal, and emerald ores to the mountains.

Now survival in mountain biomes will be even more interesting. Also, goats now spawn on the snow slopes, as for the rabbits they spawn in the mountain groves.

It is also worth considering that have been updated the textures for ores as:


And now the most interesting news is that the Glowing Octopus has been added to the game again. In case the Glowing Octopus gets damaged it will produce glowing ink particles. Also, Mojang decided to return to the game the ability to use dye to color the text of the signature. In addition to squid, the game now has frames for glowing objects, as well as bundles with glowing ink. 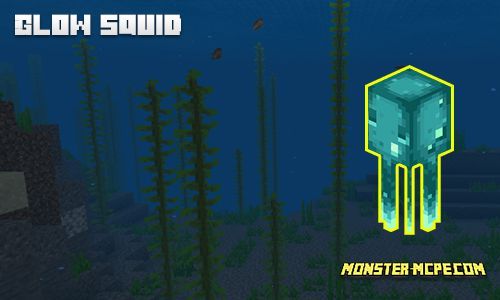 With the release of the new update, Mojang has also fixed a large number of different bugs. In total, more than 50 different bugs were fixed, 19 of which relate to the technical part of the game, and the remaining 37 are gameplay.

As mentioned above, with regard to the technical part of the game, 19 bugs were fixed. The main attention was paid to the GameTest framework in which 11 changes were made.

Among the fixes in the game, the developers of Mojang paid special attention to the blocks such as pointed dripstone. For those who do not know what it is, this is a new type of block that forms such formations as stalactite, stalagnate, and stalagmite. The Mojang developers added a new block that is called a Dripstone Block.

Fixed the message about death from Stalactite and sounds. Also, note that if you throw the Trident at the sharp end of the dripstone, it will break. Placing the dripstones in the water can no longer remove water. Also, the sharpened dripstones now have the correct hitbox.

We have selected the most significant from the entire list of fixes:

1. From now on fixed the certain crashes that could occur during the gameplay while the player was trying to change the name of the map using an anvil when the second anvil slot was not free;
2. Now mobs that use shields put it in their left hand;
3. Fixed bugs that could occur with some command blocks;
4. Also, several minor crashes were fixed that could occur during the gameplay;
5. Villagers can no longer walk through the wall in order to go to sleep into the bed in case it is next to them;
6. Cauldrons can now be filled with liquids such as lava or water when it is dripping under the stalactites;
7. Glowing signs will no longer go out.
Facebook
Twitter
Pinterest