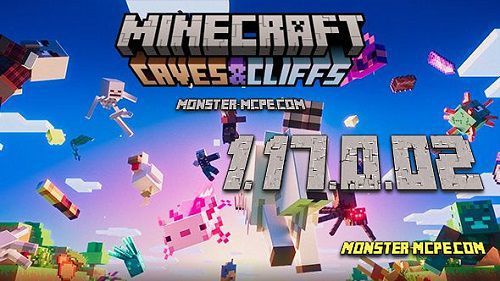 We are glad to present you a new update about which we already talked about last week, namely Minecraft PE 1.17.0.02. Last time, for some reason, the developers of the Mojang studio released an update, but surprisingly for all players, the update was presented only for Windows 10 and Xbox users. At the same time, the developers announced that the release for users of Android devices, as well as Android operating systems, for technical reasons, was postponed to Tuesday, June 8th.

That is why today we present you a new long-awaited full update for Minecraft PE 1.17.0.02 for all users of Android devices! In the new update, the Mojang developers have added almost all the content from the test versions, as well as the Screaming Goat, three new achievements, and made eight changes. Let's take a look at the features of the new update below.

In the new release, the developers of the Mojang studio have added almost all the content from the test versions, namely Axolotls, Mountain Goats, Squids, and more than fifteen other game features. You can find more detailed information about all the features of the Minecraft PE 1.17 update in the Minecraft 1.17 article!

The first thing worth paying attention to is of course the Screaming Goats! This is if you didn't know that it is a very rare type of goat. The probability of such a goat spawning in the Minecraft world is only 2%. This type of goat makes quite loud sounds, much louder than simple mountain goats.

They are also more hostile and will attack more often than others. In general, screaming goats have no noticeable differences in appearance and can also provide milk to the player (use a bucket for this).

Also, new achievements are a feature of this update. For instance:

1. With and Without wax. Players need to apply wax to all the blocks of copper and remove it from them;
2. The Power of healing of friendship. Players need to team up with the axolotl and win some battle;
3. Whatever your goat wants: Players need to get into the boat and swim with the goats.

The new fixes of bugs and changes related to gameplay

In total, the Mojang developers have made 8 new changes for the Caves & Cliffs update. Let's consider below the most basic ones in our opinion:

1. The visibility while swimming in underground caves has been improved;
2. Updated panorama of the Main Menu in the style of Caves & Cliffs:Part1;
3. The loading screen has also been updated;
4. The textures of the compass, clock, and ore have been updated;
5. Updated sounds of damage when burning, freezing, and drowning;
6. Now, when used, Bone Meal makes a sound;
7. Drowned now drop copper bars instead of gold bars.

We also draw your attention to the fact that the Mojang developers have carried over 70 different bug fixes from the test versions, thereby fixing bugs and crashes in the game and during the gameplay.

And the last one is technical changes. In total, Mojang made a little over 30 different changes for add-on developers. Also, updated templates for mods: