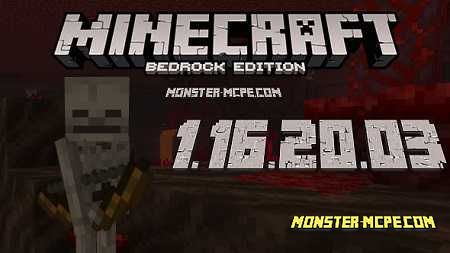 Today, the developers of the Mojang have presented to all Minecraft fans a new fascinating update which is Minecraft PE 1.16.20.03. This is a new update for Android users with new interesting and useful features and changes, such as new achievements, an updated interface, opportunity to be respawned in the Nether world, and other gameplay improvements!

Tonight, the developers of the Mojang studio presented a new version of the Minecraft game, namely the new Nether update, Minecraft Pocket Edition 1.16.20.03. In this update, Mojang focused their attention no longer on mobs, but on gameplay in general and on the graphical aspects of the game. Also, certain work was carried out on the new blocks of Nether World. New blocks have been fixed and improved, allowing players to take advantage of the new respawn mechanic.

In the new Minecraft Pocket Edition 1.16.20, players will be able to use the fully functional block that fans of the Minecraft world have been waiting for for so long. You probably already guessed what we're talking about .. yes, this is the highly anticipated Anchor of Respawn. 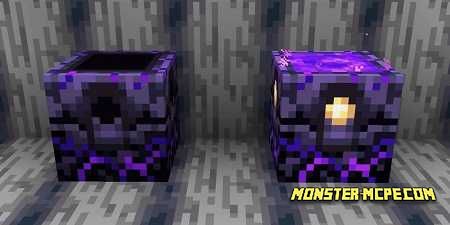 For those who do not yet know about the useful features of this block, this is a block that allows players to place a spawn point in the Nether world, which is a very useful function for every player. This unit has several charge levels. After each use, the block's charge drops by one level. In total, this unit has four charge levels. You can use Glowstone to charge it. We also draw your attention to the fact that if a player wants to use it in Overworld or in such a dimension as End, this block will either disappear or explode.

The new Minecraft PE 1.16.20.03 update will allow players to finally get the opportunity to be respawned in the Nether. You probably have already seen the recipe for crafting this block, but still below for those who have not seen, you can see below:

In order for the player to craft this block, you need to use only two types of blocks. In Minecraft 1.16.20 you have to get these blocks in the Nether, namely:

1. The first one is CryingObsidian, it is the main block for the recipe;
2. Glowstone.

Finding and getting these blocks will not be difficult. For example, in Minecraft Pocket Edition 1.16.20, a block like Crying Obsidian can be found in a chest near the Ruined Portal which is generated only in the Nether world. 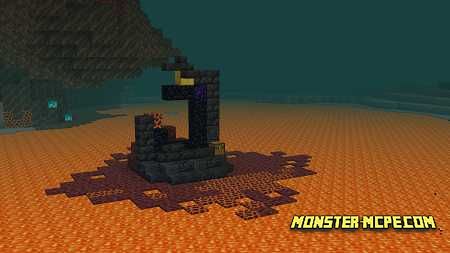 Also, we draw your attention to the fact that in addition to the efforts that you will need to get and craft this block, you will also need certain expenses for its maintenance. As mentioned earlier, Respawn Anchor requires charges which give it blocks like Glowstone. You need four Glowstone blocks to charge.

New achievements allow players to better understand the Nether world and discover all aspects of the new update. Let's take a brief look at the new achievements with you and what needs to be done in order to fulfill them.

1.Saddle and rides the Strider;
2.The player should visit all the new biomes of the Nether world.
3.The player should use the compass for Lode-stone;
4.Fully charge the block of Respawn Anchor;
5.Use gold to distract the Piglins' attention;
6.Explore structures such as the Bastion Remnant where hostile Piglin creatures live;
7.Examine the chest at Bastion Remnant;
8.Get Crying Obsidian;
9.The player should craft a complete set of Netherite armor;
10.Find ancient debris;

And the last thing we will draw your attention to is the updated interface.

The updated design allows players to more comfortably use and interact with the in-game achievements menu.

The developers of Mojang decided to update the interface design in Minecraft PE 1.16.20, in order to improve the user experience when interacting with the list of achievements.

Now players have the opportunity to more easily view the result of their work because for this you just need to swipe on the desired achievement.
Facebook
Twitter
Pinterest
Minecraft PE 1.16.20.03 Full Version for Android
minecraft-1-16-20-03.apk
Download free[94.63 Mb]

Related News:
Minecraft PE 1.16.100.50 for Android
Greetings to all fans of the amazing and exciting world of Minecraft.
Minecraft PE 1.18.0 for Android
We present to your attention the new version of Minecraft Pocket
Redstone Mechanic Evolution 1.14/1.13+
A new add-on that adds new creatures to the game. This add-on, unlike
Redstone Mechanic Addon
Increase your playing skills and get a great experience in game,
Comments (0)
Commenting