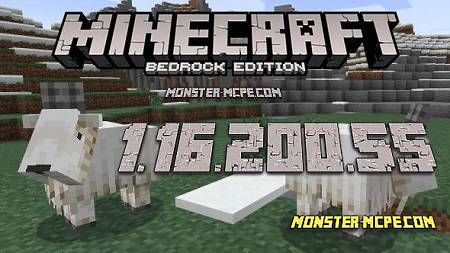 Download the full version of the game Minecraft PE 1.16.200.55 for Android with working Xbox Live. There are many new things such as: bouncy goats, bug fixes, improved performance, as well as dangerous Powder Snow.

Mojang Studios keep releasing beta versions for Nether Update. It turns out that there are still some things in game that need to be fixed in MCPE 1.16.200.55.

For example, there is a more fine tuning of sounds in the game. This means that players are able control the different categories of sound.

Earlier we could only decrease or increase the general sound and volume of music, now we can adjust both sounds of mobs and sounds of blocks, and so on.

It became much more settings in Minecraft PE 1.16.200.55. This will allow players to customize their game. Do not forget about “Caves & Cliffs Update”. You can enable new features of this update in the game settings menu when creating a world.

If you turn it on, you will be able to meet real mountain goats in Minecraft 1.16.200.55. They live only in the mountains. In this case they are a neutral mobs. If the player gets too close to the goat, then player can be attacked. Before the attack, the goats are accelerating and push the player far away.

However, You can also dodge them.

Related News:
Minecraft PE 1.16.200.53 for Android
Today is Thursday, which means that today we present you with a new
The Caves And Cliffs Update introduces lots of Snow And Goats!
We are in a hurry to present to you the latest news from the world of
Minecraft PE 1.16.200.52 for Android
Not so much time has passed since the recently held Minecraft Live
Minecraft 1.17: The Caves and Cliffs Update
Greetings to all fans of the Minecraft world. Today we'll tell you
Comments (0)
Commenting