A great pack for those who would like to change the familiar and boring sound of explosions in the Minecraft world. It will improve the sound by making it as powerful as it was before.

This sound may be familiar to you from the PC version of Minecraft Java.

This will slightly diversify your world of Minecraft PE and make it look more like a PC version.

In general, this is a rather useful modification that will make the explosions more effective due to sounds, which in turn were also changed by changing the tonality and speed of sound. 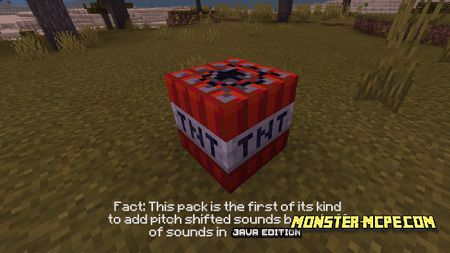 Related News:
Minecraft 1.16.0 for Android
Dear fans of the Minecraft world, we are pleased to present to you
Download Minecraft Java 1.15
We are glad to present you a new update for the PC version of
Download Minecraft Java 1.14
Everyone is looking forward to a new update for everyone's favorite
Java Aspects Pack
This pack is very huge and completely done in original style of
Comments (0)
Commenting