Are you tired of such weapons as a bow and would like something new? If so, then the new resource pack is what you need. This resource pack allows players to replace existing bows with new firearms.

Also, in addition to the textures of bows in the game, their sounds will be replaced with textures of firearms and their sounds. The main feature of this texture pack is that players can no longer use any additional add-ons that could add firearms to their world, now you just need to use this texture pack, which can also be used both in your world and on servers and realms.

Below you can see screenshots of the weapon: 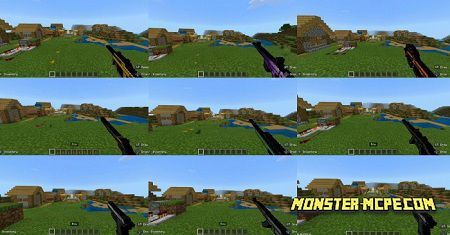 If you like pistols, then use the resource pack for pistols, if you like semi-automatic weapons then use semi-automatic weapons for battles, it all depends on your choice and desire. Below you can see different resource packs, the main difference between which is the choice of different types of weapons. Also, as mentioned earlier, each type of weapon that replaced the bow, in addition to the new textures, will also have the corresponding shooting sounds.

Please note that in addition to the above resource packs, players can also use the Camouflage resource pack, which allows players to use all types of weapons with a certain unique camouflage, some of which you could see in the famous and popular game Call Of Duty!
Facebook
Twitter
Pinterest
Bows 2 Guns Texture Pack
b2g-snipers.mcpack
Download free[561.11 Kb]