Have you ever seen flying pigs? If not, but really want to see this funny phenomenon, then the new texture pack is what you need. This pack of textures changes the textures of all known dangerous mobs, known to all players as Phantoms. These are flying hostile undead mobs that attack players who have not slept for more than three in-game days. The new texture pack changes the textures and model of phantoms to flying pigs.

Now, these hostile and dangerous mobs will no longer look so scary and dangerous, now they will be cute and more fun. But do not forget that although they look different and more fun, they are still just as dangerous and hostile towards the players.

In the Minecraft world, only the models and textures of phantoms will change, but the behavior remains the same. Let's take a closer look at the specifics of this texture opaque below.

As mentioned earlier, the new texture pack changes the textures and model of phantoms to flying pigs, after which these dangerous and hostile creatures do not look so scary, but they are still dangerous at night. Please note that flying pigs often fly in groups, so be careful.

For a more fun experience, re-textured phantoms will make the sounds of grunting pigs as they fly overhead. Added sounds of pigs. Also, the retextured phantom model uses flapping sounds during flight. Added animation for the pig's wings and legs. The flying pig's legs will move during the flight.

Below you can see a screenshot of what a flying pig looks like in the Minecraft world:

Other screenshots of retextured mobs: 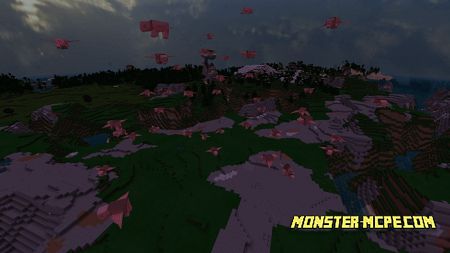 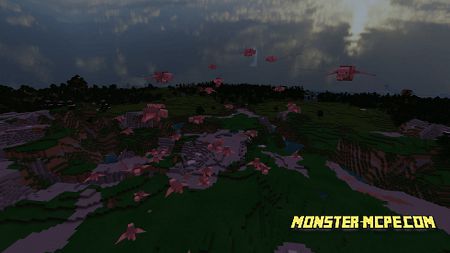