A crazy addon that adds new crushing weapons to the game, namely Rocket Launcher, Landmine, and Minigun. This wonderful addon will be interesting to absolutely all players, all fans who love to shoot and blow something up!

Go to the nearest weaponsmith and take everything you need for this, namely emeralds.

Let's consider with you what a new weapon is:

This item looks like a switch that blinks before it explodes. The mine will blink red, after being placed on the ground, the player has only 5 seconds to run away. At the end of this time, it will explode breaking blocks underneath. We advise you not to place them near your buildings. Their damage is similar to the damage of a charged creeper.

There is also a simpler type of mines, it does not destroy blocks beneath and around itself, is a simpler version, and will blink yellow.

A very serious weapon that can hit any targets. Just place in the indicated place and no hostile mob will pass. Use with extreme caution, as this weapon is capable of breaking blocks when erased.

The same powerful weapon, just place it in the indicated place. They can hit any mobs. Unlike the Rocket Launcher, they don’t leave holes, and if they were broken, you can just pick it up and put it again. 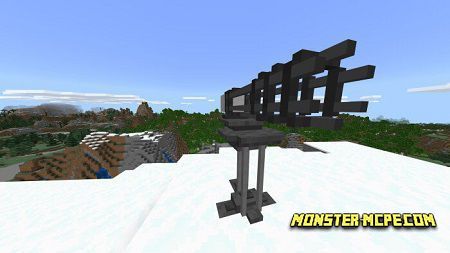 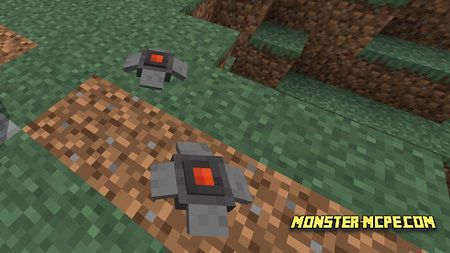 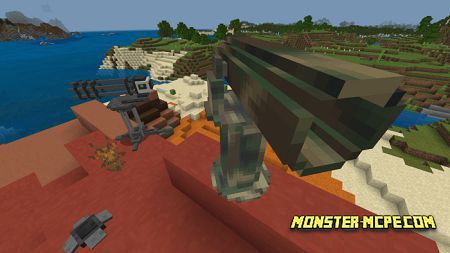 Related News:
Lost Weapons Add-on 1.14+
Are you tired of the monotonous and uninteresting weapon in the
Download Minecraft Java 1.14
Everyone is looking forward to a new update for everyone's favorite
Redstone Mechanic Addon
Increase your playing skills and get a great experience in game,
Master for Minecraft-Launcher v.2.1.31 (MCPE Master)
Master for Minecraft-Launcher (MCPE Master) is a functional program
Comments (0)
Commenting