Very strong and already not existing creatures, which look like lizards with huge sizes, it is Komodo Dragon. They were added to the gaming world of Minecraft. Here, you may find them, how they spawn in their local biome. In general, it is neutral creatures and they will not attack you first. Only in case if you decided to hit them, they will hit you and poison.

In order to find them, you should visit Savannah biome or just use a spawn egg in order to spawn them, but note that it can be only in creative mode! As it was mentioned before, these mobs are not dangerous for player till you not hit them.

In order to tame them, you can use raw meat. After they will be tamed, they will follow you everywhere and guard you.

There are two types: 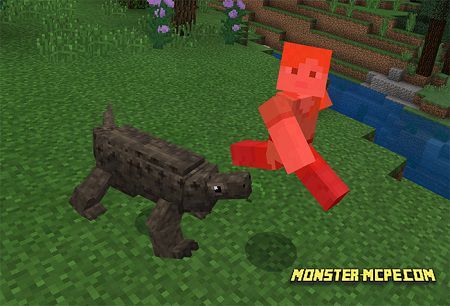 After you kill this creature, you will get some loot, one of the items from the loot will be the reptilian skin, it is replacing ingot of iron. Using this item, the player can create some armor or tool.
Facebook
Twitter
Pinterest
Komodo Dragon Add-on (1.8+ Only)
komodo-dragon-add-on-v1.0.0.zip
Download free[748.92 Kb]

Related News:
Magent And Pagent Add-on (1.8+ Only)
This addon adds a new creature to Minecraft, which are Pagent and
Download Minecraft PE 2.0.0 apk free
A lot of players of PC, X-Box, PlayStation, and of course of mobile
Redstone Mechanic Addon
Increase your playing skills and get a great experience in game,
Villagers Come Alive Addon
Villagers Come Alive Add-on creates new functions for default
Comments (0)
Commenting