Have you ever faced such a problem when you need to move an animal from one place to another, but it happened that it either ignores the food you give it or runs away being tied? If this happened to you, then the new addon will definitely be useful to you. The new addon will fix the problem of moving and luring animals in the Minecraft world, which will make it easier for players to lure and carry an animal from one place to another.

Using the new addon, players no longer need to worry about the fact that it can escape somewhere at some point. Players can carry their animal from one place to another without using any bait such as wheat, vegetables, or other seeds, and does not require the use of a leash. Now all you need to do for this is just go to a certain animal, pick it up and move it.

Everything is very simple, for this the players need to use a new and special item for this. The new item is called Carrying Gloves. You can see the recipe for crafting such gloves below:

This is a new unique item that players need to use directly near the animal. Once applied, the player will be able to carry the selected animal. But we draw your attention to the fact that as soon as the player changes the item, he will drop the animal to the ground.
Let's now look at what types of animals players can carry in the Minecraft world.

Below you can see a list of the types of mobs that players can carry in the Minecraft world: 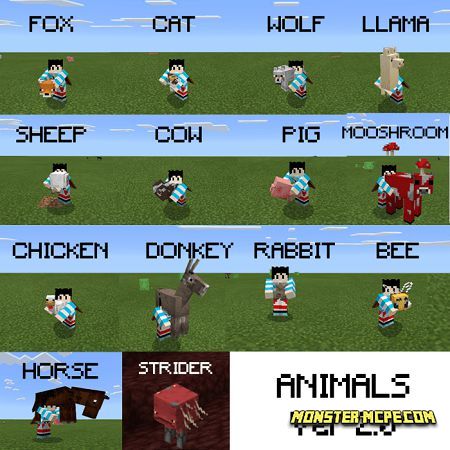 Second version without using crouch. Players just need to go to the mob and use gloves, but if you use sneak, the mob will drop to the ground.
Facebook
Twitter
Pinterest
Carry Animals Add-on 1.16+
carry-add-on-v2.mcaddon
Download free[17.29 Kb]

Related News:
Village And Many Biomes Near The Spawn Point Seed
Would you like to change the place of the spawn in your Minecraft
Cave Enhancements Add-on 1.16+
We present to your attention a large and fairly voluminous Cave
Jurassic Addon
Jurassic Addon - this is a fairly large and voluminous addition that,
World Animals Add-on 1.16/1.15+
Would you like to add more different animals to the Minecraft world?
Comments (0)
Commenting