Would you like to test your skills in new and unique environments? If yes, then a new addon with new challenges is what you need. Your Minecraft world will become more interesting and at the same time more dangerous with new features of impossible survival. Due to its new impossible conditions of survival, this addon may be too tough for you. It all depends on your skills. This is a new unique experience that allows you to get new emotions. Let's consider below what features will be added to the Minecraft world.

The new addon adds more than ten different unique features that will complicate your survival in the Minecraft world, making it more impossible.
The first thing we will draw your attention to is mobs such as Creepers. New creepers will now charge as soon as they see an enemy or when the player approaches them. Also, when players approach the Creepers, lightning begins to strike them.

The next creature is the Skeletons. From now on, they have the appearance of ghosts.

The next feature is the bad effect that affects the players, namely slowness and weakness.

In addition to bad effects, there will also be good effects in the Minecraft world, namely resistance. Yes, this is all that you will have, since earlier we said that this is impossible survival and resistance is the only thing that can save you sometimes.

Upon entering the lava, you immediately die.

Updated zombies that have the OP feature and more! 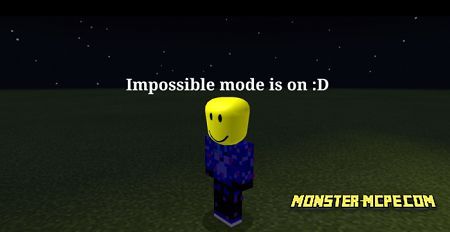 In order for players to use the new addon, you must use the / give @s command_block command, then place the resulting command block on the ground, set this block to repeat and make it active without time limits, enter the / function command, followed by impossiblemode text.