Have you ever seen sharks in the ocean of the Minecraft world? If not, or if you want to see these big and strong animals then the new addon is what you need. This addon adds five types of sharks to the Minecraft world, each of which has very beautiful and high-quality details and textures. Each type of shark has a unique type of behavior that corresponds to what in real life, as well as the habitat and appearance. This is a great experience with sharks that you will love.

As mentioned earlier, five types of sharks will be added to the game, each of which has certain unique features that correspond to those that they have in real life. Let's take a look at these creatures below.

1. The first shark is a monster among sharks called the Great White Shark. This shark is so popular that we have seen it more than once in films, cartoons, various games, comics, and so on. The most formidable and largest predator that lives in the waters of the ocean. This creature has large and sharp teeth, which, together with a strong bite, can kill and bite any other living creature. This shark can grow up to six blocks in length. In real life, the longest shark was six meters long. In the world of Minecraft, this shark has 24 health points, it is neutral towards players. Damage and drop will remain a surprise for you! Below you can see how this shark looks in the game: 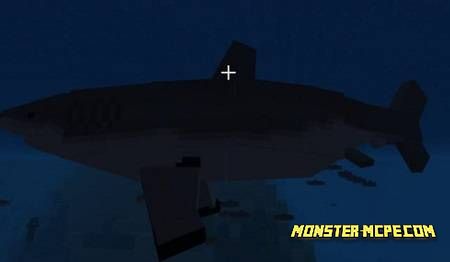 2. The second shark is not so dangerous and big, it is a small shark three blocks in length and it is called the blacktip reef shark or Malgash night shark. This shark lives on sandy beaches and in tropical areas. This shark can be seen in real life in the waters of the ocean or even in certain places in aquariums. Their feature is a black spot on the fin. We would like to note that even today they cannot say for sure why this spot appears there and what exactly it is intended for. One of the assumptions is to attract a partner. This shark is passive in relation to players and has 20 health points. Damage and drop will remain a surprise for you! Below you can see how this shark looks in the game:

3. Another type of shark that many call small-spotted catshark or the sandy dogfish. This shark has other names, but most often you will hear small-spotted catshark or the sandy dogfish. This is a simple shark of small size that lives in the UK and parts of Europe. This is a cute little shark that very often many people who do not know about it confuse with a catfish. This is a nocturnal animal and during the day it is at the bottom, and at night it begins its activity. This shark is only one and a half blocks long. This shark is passive towards players and has 10 health points. Below you can see how this shark looks in the game:

4. The next type of shark is not as harmless as the previous one, because it is a Tiger shark. This shark, like the reef shark, lives in tropical places. This animal will attack and eat all living things that meet on its way. We draw your attention to the fact that she will not attack the player until the player hits her first. This is a very strong shark that can also deal with its opponent in a matter of seconds. It is neutral towards players, has 20 health points, and is five meters long. Below you can see how this shark looks in the game: 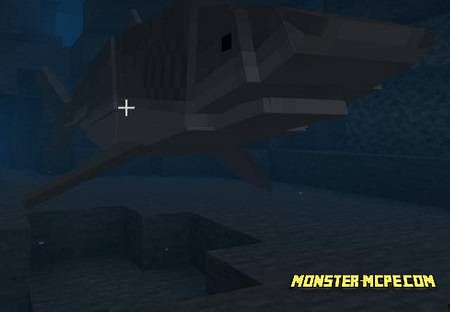 5. And the last shark is the bigeye thresher. This shark has several names, for example, big-eyed fox shark, big-eyed sea fox, deep-sea fox. An interesting feature of this shark is that the tip of its tail is sometimes longer than its body. This feature allows this shark to stun fish. This shark is neutral towards players and has 20 health points. Below you can see how this shark looks in the game: 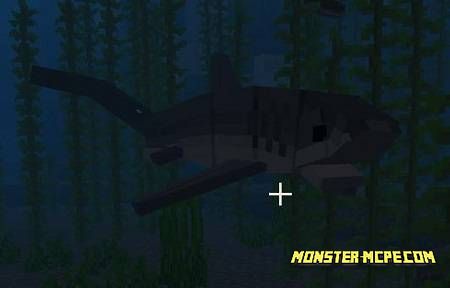