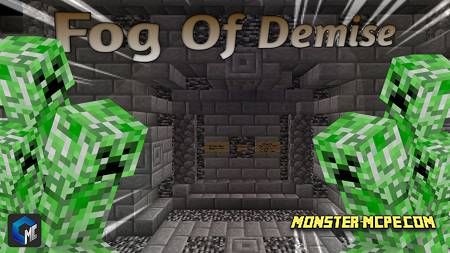 Have you ever played on such a map as Fog Of Demise, which was previously available only for the Java version of the Minecraft game? If not, then we recommend trying the first experience on a new map in the mobile version of Minecraft PE. This map is now available for Bedrock. For those who have previously played this map, it will be interesting to explore a familiar world for themselves, but already on mobile devices.

This map is an exact copy of the Java version. The player's goal in this mini-game is for the player to get to the designated place, overcoming different corridors in which the creepers are hiding. The main goal is to assign a certain material, namely black wool, to a special altar.

This game will be interesting for both experienced players and beginners. It's a new experience with a new addicting map.

Related News:
Bees Like Creepers Texture Pack
We present you with a new and fun pack of textures, the idea of
OreCreepers Add-on 1.16/1.15+
Would you like to add new types of creatures to your Minecraft world
Monster Hunter (Bedrock) Addon 1.15+
We present to you a very interesting addon that adds new creatures to
Download Minecraft Java 1.14
Everyone is looking forward to a new update for everyone's favorite
Comments (0)
Commenting