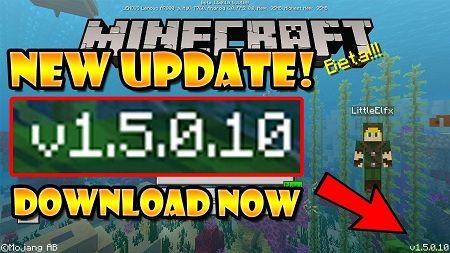 The new Beta version of Minecraft Bedrock 1.5.0.10 (PE) fixes a big number game errors that players have noticed in gameplay. In addition, the developers have slightly updated the main menu screen.

Newrelease of the full version of MCPE 1.5 should take place on June 21.

Related News:
Teenage Mutant Ninja Turtles Add-on 1.17/1.16+
What do the four simple but very popular letters, TMNT, mean to you?
Village And Many Biomes Near The Spawn Point Seed
Would you like to change the place of the spawn in your Minecraft
Tools and Armor Add-on 1.17+
You can never have too much armor and tools.
Turtles Add-on 1.16/1.15+
Do you like turtles? If so, then you will like the new addon which
Comments (0)
Commenting