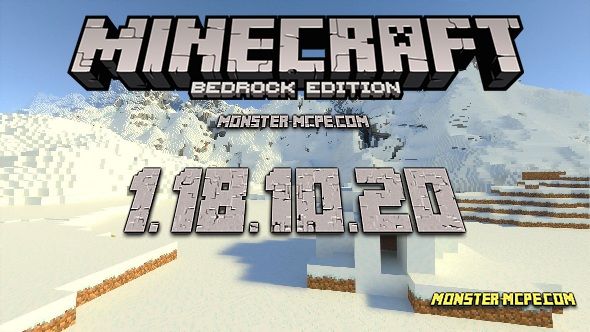 Developers have released a test version of Minecraft PE 1.18.10.20 on Android. The update worked on equality with Java, made six changes and fixed 33 bugs.

Changes
Made 6 changes. Important:
Destroyed portals under Oceans and Swamps are generated dry
Frost Walker enchantment works within a radius of 8 blocks
You cannot set fire to the top of Lightning Rods.
Pointed Dripstone can only be placed on full block faces
Renamed Acoustic Sensor to Sculk Sensor
Improved falling element animation

Equality with Java
Added 3 version equality fixes. Main:
Improved item and block textures to fix bugs
Adjusted the Red Dust signal level from the Otherside and Pigstep music records
Shake animation will only appear when the bow is fully drawn

Food icon is transparent again when reloading
Ignited TNT will not explode when spawned by a team if the world has disabled TNT explosions through settings
Resident Farmer does not collect more than 8 stacks of items
Mob spawner does not stop creating mobs when the world is reloaded
Iron Belly achievement is accomplished again
Fixed the infinite spawning of mobs in the Structural Block
Fixed taking damage from your own armor when enchanting
Food again applies effects
Water flows correctly near edges
Fixed the width of the Wall Candles
Large hardleaf, Amethyst bud, and Amethyst cluster are not destroyed in Structural Block
Amethyst cluster is destroyed correctly when the supporting block is destroyed
Copper elements are oxidized in the Nether
Large hardleaf is only set on certain blocks
Glowing berries are set in the correct direction
Magma blocks do no damage when fire damage is disabled in settings
Emotions are applied again on Scaffolding
Fixed movement issues after rebirth
Villagers, Rabbits, and Foxes will get winter textures when spawning in Jagged and Frozen Peaks
Goats will spawn in Jagged and Frozen Peaks
Fixed a bug with the camera when interacting with the Bed in flight
Fixed a bug with lighting after going to the Upper World
Fixed the coin display in the In-game Marketplace
Achievement button works again in the pause menu
Changed the appearance of menu buttons
Fixed repetitive characters next to usernames after being added as a friend
When updating worlds, the Bedrock layer between levels Y=0 and Y=4 will be replaced by Deepslate
Deep copper ore will be generated in Dripstone caves
Removed the "empty" additive from the /effect command

Related News:
Realistic Explosions Add-on 1.17+/1.18
The Realistic Explosions mod will try to make explosions in Minecraft
Sculk Ore Mod 1.16+
Do you know what the new Sculk Sensor block is? If you followed the
Minecraft PE 1.16.210.56 for Android
Minecraft PE 1.16.210.56 for Android released: meet the awaited
Project Walker Add-on 1.16+
Would you like to change your Minecraft world and create more
Comments (0)
Commenting