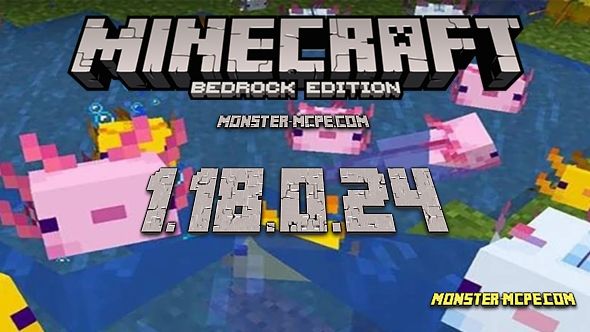 The developers have released a test version of Minecraft 1.18.0.24 on Android. They are fixed 25 bugs and added only 2 technical changes.

Highlighted the main ones.

Fixed the continuous placement of water, lava and Rough Snow
Beds or Paintings will not stand on the Block of Light
Wood elements of Mines are not generated over the lava
Earth layer is not generated in the Mines
Pillars in Mines are again generated from Wood instead of Bark
Fixed a bug with increasing the size of worlds
Fixed the illumination of the water layer when pointing with Small Dripleaf
Fixed two high flowers falling out when water destroys the top of a flower
Fixed a bug with the ability to see through blocks
Fixed Villagers sounds on NPCs (Educational Mode)
Fixed a bug with Chorus Fruit at low levels
Smoother animations for Exploding, Settling Potions, Exploding TNT, and Experience Potion
All terrestrial plants can be placed on Mycelium
Increased the chance of Axolotls spawning in Lush Caves
Fish will avoid Axolotls
Lava Cube will attack Iron Golems, and Slug won't touch Snow Golems
Phantoms will no longer be stuck in mountains
Ore is generated as in Java
Fixed Deepslate being replaced with Gravel when generating the world
Reduced generation of Gold Ore in the Barren Grounds biome
Lava no longer appears in the Frozen Ocean biome
Improved the generation of Deep Copper Ore in Minecraft
Improved names of new mountain biomes

Related News:
More Plants Add-on 1.17+
All of us are taught from a very young age that fruits and vegetables
More TNT Add-on 1.16+
How often do you use TNT? If you like it often and then this new
Fruits Mod (Add-on) 1.16.40/1.16+
Would you like to add a new healthy fruit to the game that would give
Extra Terrestrial Add-on 1.16/1.15+
Have you ever watched the famous film E.T. The Extra-Terrestrial? If
Comments (0)
Commenting