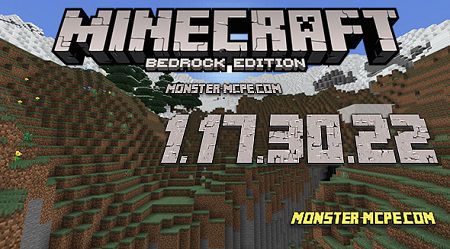 Just a couple of hours ago, the developers released a weekly scheduled update, namely a test version of Minecraft PE 1.17.30.22 for all devices that use the Android operating system, as well as for all users of Android devices in general. In the new update, seven new changes were added, which are again related to the parity between the PC version of the Minecraft Java game and the mobile version of the Minecraft Bedrock game, also fixed thirteen different significant bugs and made five new technical changes.

Let's now take a look at all the significant changes in this update below.

In general, the developers of Mojang studio have made seven new fixes for the parity of the two versions, below you can see a list of these fixes:

1. The barrier can break even without the block itself in the hands of the player;
2. Projectiles no longer pass through the Barrier blocks;
3. The player can no longer interact with blocks behind the Barrier;
4. If the player destroys the dropped Shulker Box, the items will be saved;
5. Bow and Trident now look like in Java version of the game;
6. Water and Grass color is now displayed correctly;
7. Abandoned villages will be less common! Finally!

Now, an equally important aspect of the Minecraft Pocket Edition update 1.17.30.22, is of course bug fixes!

In total, Mojang found and fixed thirteen different bugs. Below you can see a list of the most significant bug fixes:

1. Now the player does not move to the zero levels when dismounting from a mob at a negative altitude (Only for Experimental mode);
2. Cartographers sell Treasure Map only to undiscovered Fortresses;
3. The enchanting in the Enchanting Book has been balanced;
4. The display of the Crossbow, Shield, and Trident has been fixed when playing online with skins;
5. The animation of throwing the Spyglass after use has been fixed;
6. Improved lighting in RTX mode;
7. The quick access panel does not darken when the anti-aliasing of the graphics is increased;
8. The player's crosshair will not flash while playing online;
9. The download bar from the Marketplace of the game has been changed;
10. The displacement of the Quick Access Toolbar has been fixed;
11. Fast craft on the touch interface works in the Stone Cutter and the Loom.

The most significant is that now the commands in the mods can be activated even if the player does not have cheats enabled!