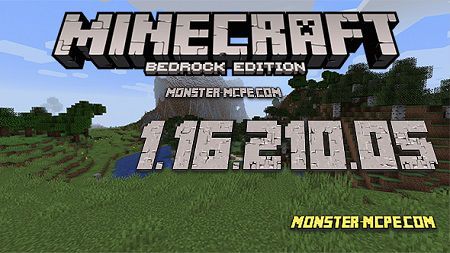 The developers have released Minecraft 1.16.210.05 on Android devices. The update is aimed at improving stability, more than 100 changes have been made in this version.

The work on version synchronization continues.

This time we fixed it:

Sounds in the Nether World:

Players can now hear ambient sounds in the Nether world.

An item in Ocean Biomes will only create Seagrass, Coral, and Coral Fan.

Fixed 86 bugs. We have already talked about some in previous versions.

Let's highlight the bugs that are important to mention:

Related News:
Battle Box (Fan Made) Map
Have you ever heard of an event like the Minecraft Championship (MC
Minecraft PE 1.16.100.51 for Android
We are pleased to inform you that today the Mojang developers have
Ingen Lost Files Add-on 1.16/1.15+
Do you like dinosaurs? If so, then you will definitely like the new
Download Minecraft Java 1.14
Everyone is looking forward to a new update for everyone's favorite
Comments (0)
Commenting