Imagine a Minecraft world in which every living creature is aggressive and hostile towards other living things, including those that were initially neutral or passive. Yes, your Minecraft world is turning into one big battlefield where all animals and monsters will fight against each other, all this in the new Angry Mobs addon. Add more fun to your world and more epic battles. Let's take a look at the features of this addon below.

As mentioned earlier, the new addon changes the behavior of all mobs in the game because of which they will be hostile and attack all other creatures that are not like them.

Now you can see how villagers and iron golems, zombies and husks, pandas and parrots, and many others are fighting among themselves. All creatures including horses and others will fight other mobs. Your world will not be the same, now the Minecraft world will be one big madness.

Mobs that were previously passive and did not pose a threat to players and other creatures now have the melee ability. Of course, they will not inflict the greatest damage, but at the same time, you should not underestimate them now, since now they will be aggressive. Mobs like spiders will always be hostile and aggressive. 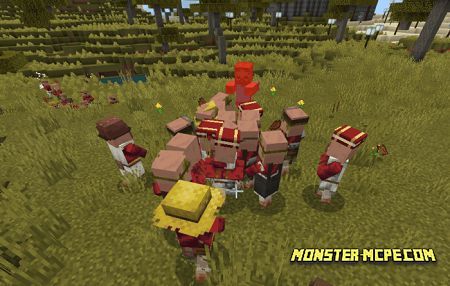 Please note that in order for the creatures to fit comfortably in the arena, their size and width have been changed. For creatures like Enderman, the teleportation distance has been changed, namely, reduced.

Mobs that previously burned in the daytime under the sun's rays will not burn. Also, villagers will no longer turn into villagers zombies after being hit by zombies. Please note that the mob despawn has been deactivated. Snowballs can deal damage to every living creature from 1 to 3.

Related News:
World Animals Add-on 1.18
Would you like to add more different animals to the Minecraft world?
Tools and Armor Add-on 1.17+
You can never have too much armor and tools.
SpongeBob and Gary Add-on
Perhaps there isn't a person who has never heard of SpongeBob. It's a
Golden Utilities: Transport Any Mob and Much More Add-on
Have you ever faced the problem of transporting mobs or maybe you
Comments (0)
Commenting