Have you ever celebrated the Day of the Dead? If yes, and you really like such interesting and mystical holidays, then the new addon is what you need. This addon adds new creatures, food items, and some decorations to your Minecraft world. Let's take a look below with you what will be added to your Minecraft world and how it will look.

As mentioned earlier, some creatures will be added to your Minecraft world that has some Catrina elements, in total there will be five of them.
The first creature is a wolf with the Catrina species. These animals have the same behavior as normal wolves, only their appearance changes. They spawn all over the world. Players can tame this animal using a bone. Below is a screenshot of how they look:

Other creatures with the Catrina appearance are Skeleton, Villager, and of course Catrina. Below you can see how they look in the Minecraft world:

We also want to draw your attention to the fact that these creatures have the same behavior as normal creatures of the same type. With some of them, you can interact as always using emeralds. For emeralds, new mobs will give you new decorative blocks and food in return. They spawn almost everywhere.

Below you can see an example of how it works and looks like:

Another mob that will also have a Catrina appearance is the Creeper! These mobs have the same behavior as normal Creepers. Therefore, be careful. Below is a screenshot of how they look:

In order for the player to get new items, you need to interact with the Catrina mob (available in Survival mode). Trade with her or simply use a special stonecutter recipe: 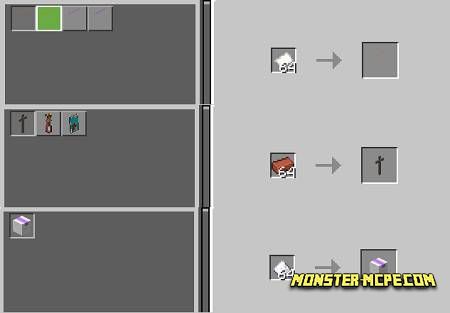 Please note that not all decoration items you can craft, some of them will have to be obtained.

Also, players can get new food items, for this interact with Catrina. New food items give players 6 Saturation.

Please note that players can also get these items using a special command in the Creative mode, namely /give @p, with the following text: dia_de_muertos: item name! Below you can see a complete list of available items: 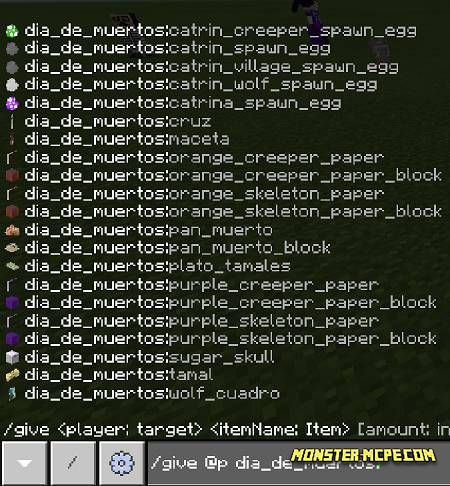 Related News:
Cuter Vanilla Wolves Add-on
We present to you a new and very interesting resource package that
Legoshi The Wolf Texture Pack
Do you know who Legoshi is? For those who do not know, this is a
Books Decorations Add-on 1.16/1.15+
A new addon for those who would like to add more interesting
World Animals Add-on 1.16/1.15+
Would you like to add more different animals to the Minecraft world?
Comments (0)
Commenting