Have you ever seen the famous Hello Kitty character? We are sure that yes, but would you like this character to be added to the Minecraft world? If yes, then you will definitely like the new addon. The new addon adds the world-famous character, Hello Kitty, to the Minecraft world, this is a white kitty with a red bow on her head. This character will play the role of a new NPC in your world. In the world of Minecraft, this NPC will be presented in four different types. Also, available are ten new skins with useful features.

Below you can see a new mob of four types, namely: 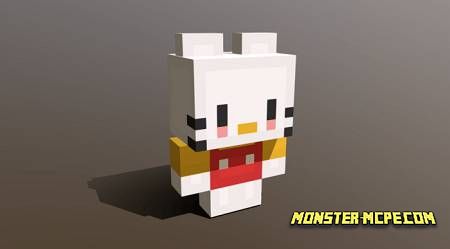 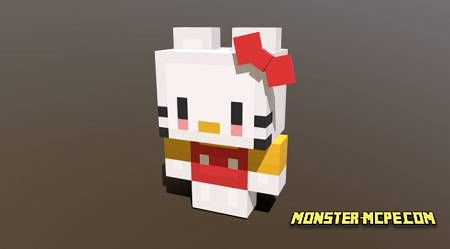 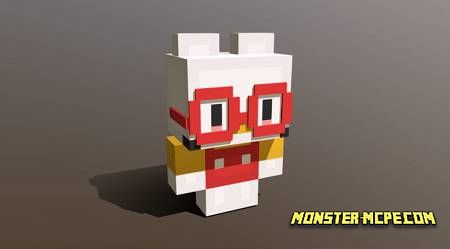 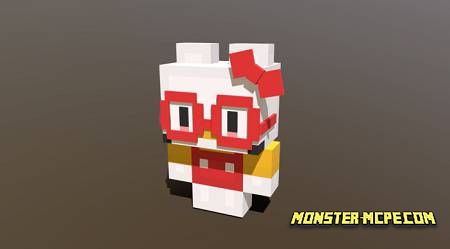 In order for these NPCs to be added to your Minecraft world, use the Creative game mode. Open your inventory and use an item called Hello Kitty!

In order for new NPCs to start working, use the special spawn eggs that you can find in your inventory, and get tools using the /function get_tools command.

After using the above command, the player will receive special tools with which he can interact with new cute NPCs. Below you can see which tools will be added:

What tools will be available to the player?

In general, four new tools will be added to the game thanks to which the player will be able to interact with new cute NPCs. Which ones you can see below:

1. The first tool is Clothes. This tool allows the player to change clothes for the cute Hello Kitty NPCs. Please note that this action will be available without the NPC screen. As mentioned earlier, there are only four skins available to the player.

2. The second tool is NPC Berries. This tool allows the player to enable or disable certain features of the Hello Kitty NPC. After the player turns on the NPC features, you will have such features as in the screenshot below:

3. The third tool is a berry, but not to be confused with the previous one. This tool allows the player to influence this NPC so that they walk, fight, or just rest.

4. And the last thing is Remove NPC! As you already understood, this tool is designed so that the player can remove the selected NPC.

Related News:
Among Us NPC Add-on 1.16/1.15+
Have you ever played such a popular game as Among Us? If not, then we
Minecraft PE 1.18.0 for Android
We present to your attention the new version of Minecraft Pocket
Automaticraft Add-on 1.15/1.14+
A new large add-on that adds a large number of useful items to the
Insane Universe: Humanoid NPC Add-on 1.16+
Do you often interact with game NPCs? Would you like other NPCs? If
Comments (0)
Commenting