Have you watched the Minecraft Live 2020 event? If so, then, like everyone else, you are probably looking forward to the release of the new update and all that it will give us. The upcoming update presented us with what will be added in the summer of 2021 to the world of Minecraft. In general, a large amount of new content will be added to the game, one of which will be a new mob called Axolotl.

In the new addon, you will see the same new creature with the same behavior, textures, and with the same animation that was presented at the Minecraft Live 2020 event. 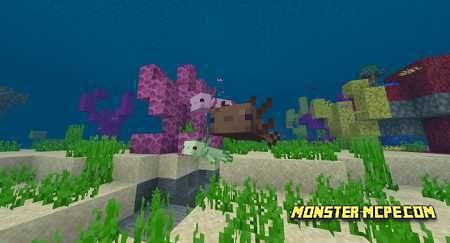 In the new addon, you will see five types of axolotls all of them will be in different colors. These creatures are not dangerous to the players. Also, please note that when they see the players they will start to follow them. Axolotls live only in the oceans. These mobs will protect the players from the other hostile mobs. 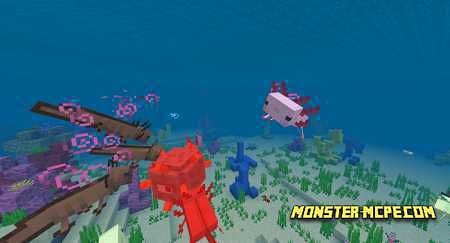 Related News:
Minecraft 1.17: The Caves and Cliffs Update
Greetings to all fans of the Minecraft world. Today we'll tell you
World Animals Add-on 1.16/1.15+
Would you like to add more different animals to the Minecraft world?
Nether Update will be released in the summer
We have prepared interesting information for you about the upcoming
Minecraft 1.17.0 for Android
We present to your attention the announcement of the upcoming update
Comments (0)
Commenting