This addon allows players to easily cover a long distance from one place to another, comfortably and quickly. Also, if you need to help someone, for example, the villagers, or you are attacked by hostile creatures, a military helicopter will help you with ease. 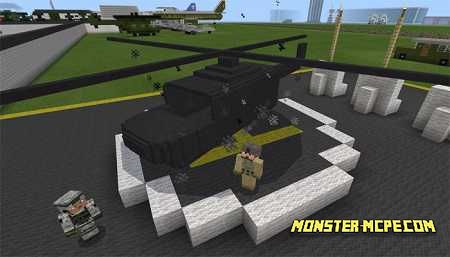 A military helicopter can destroy everything in its path, including hostile creatures and even structures. Unlike other military equipment, helicopters are very fast and can easily maneuver in the sky.

How to get such a helicopter?

Everything is very simple. To do this, the player needs to visit a dimension like Nether. In the Nether world, find such a flying creature as Blaze, but instead of this creature in the places of their spawn, you will see a helicopter, each of which you can control. We remind you that Blaze is most often spawned in structures such as the Nether fortress. Don't worry, they won't attack you.

Control your helicopter and shoot your enemies. The controls are very simple, like in all flying mechanical vehicles.

Related News:
Minecraft PE 1.18.0 for Android
We present to your attention the new version of Minecraft Pocket
More Simple Structures v1.2 Add-on 1.16/1.15+
We present you with a new addon of simple textures that adds twelve
Redstone Mechanic Evolution 1.14/1.13+
A new add-on that adds new creatures to the game. This add-on, unlike
Download Minecraft Java 1.14
Everyone is looking forward to a new update for everyone's favorite
Comments (0)
Commenting