Do you like to listen to music while playing Minecraft? If so then this addon is what you need. Music in the background during the game makes the gameplay more interesting and fun. The new addon uses a special algorithm with which musical sounds are converted to music for Minecraft and uses them as custom sounds. This addon is available on all platforms of PE devices. Using this addon, existing sounds that were converted from the added music will be added to the game. Each player will have the opportunity to add their own music, and how to do this you will learn below. In general, 8 music files will be added to the game, and which ones you will find out below.

In order for the addon to work correctly, you first need to use the behavior pack, and then enter the special command: /function music/, after the entered command you will see all available music on the screen. Below you can see how it looks: 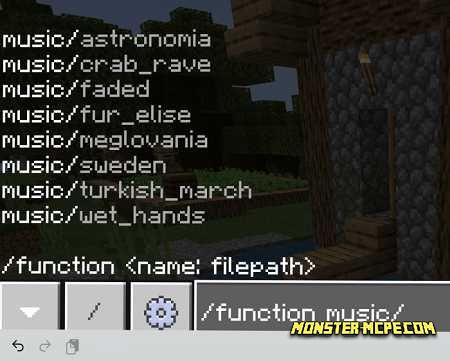 The following types of music will be added to your Minecraft world (do not forget to use the command above before each command):

If the player wants to stop the music that is being played, use the following tag: @a remove. We draw your attention to the fact that you can’t start playing the next song before you stop the previous one.

Also, players have the opportunity to put the song on repeat so that it plays over and over, this is if you like something for the background, use the command: /function followed by the text: loop/on, to disable this function use the following text : loop/off.

In order to learn how to add your own music, use the file indicated below: Related News:
Mobile Jukebox Script 1.15/1.14+
Do you listen to music in the world of Minecraft? If so, then this
GB’s Custom Addon 1.14/1.13+
We present to your attention a very large and very exciting add-on
Beautiful Background Texture Pack
Would you like to change the background of your custom menu? If so,
Function File For Command (1.8+ Only)
Meet the new command for beta MCPE 1.8, it is called Function. With
Comments (0)
Commenting