We present you with a new add-on using which players will add new weapons and a new item to their Minecraft world. These are not simple items, this is the Escanor Ax and the new golden stick. This add-on will be very interesting to fans of anime since the idea was borrowed from one of the famous anime series The Seven Deadly Sins. One of the characters existing in this anime series, Escanor has his own unique weapon which is a treasure of the Minecraft world. 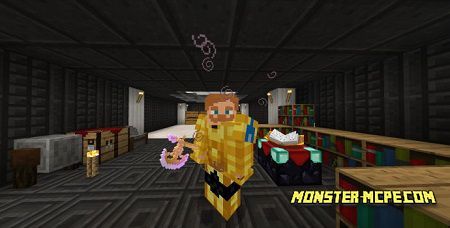 In short, for those who do not know, Escanor is a character who has unique abilities, namely in the afternoon he is a simple harmless person, and in the evening he becomes a strong and indestructible warrior. This character has his own unique treasure called RHITTA, this is the ax of Escanor. This weapon has unique textures and a separate crafting recipe. Below you can see what the ax and the second item look like:

The RHITTA ax can deal 40 damage to its target, or 20 hearts. 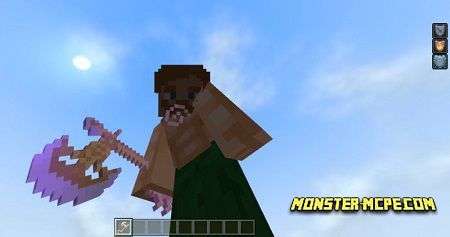 Below you can see the RHITTA ax crafting recipe:

And also the recipe for crafting a golden stick:

Players can get these items using a command such as: /give @s as well as text with the identifier sds.

When a player holds this ax, he receives additional effects, and which ones you can see below:

Related News:
More Tools Add-on 1.18
Has it ever happened that you have a lot of resources in your
Tools and Armor Add-on 1.17+
You can never have too much armor and tools.
Cave Enhancements Add-on 1.16+
We present to your attention a large and fairly voluminous Cave
Golden Utilities: Transport Any Mob and Much More Add-on
Have you ever faced the problem of transporting mobs or maybe you
Comments (0)
Commenting