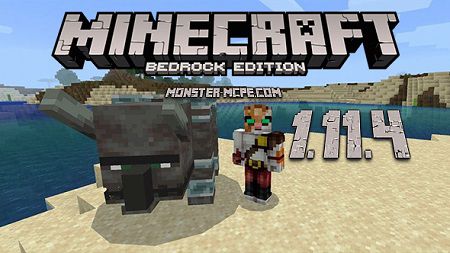 And again we get a pleasant surprise from developers, this surprise is Minecraft Bedrock 1.11.4.2. Thanks to the joint work of the developers with the MCBE players, some errors were found and fixed, errors from previous versions were also fixed, which in turn caused the release of a new version with already fixed errors.

You will learn about all the corrections in just a couple of minutes, but first, we must warn you that while watching this version, the player will not be able to access non-beta players, as well as Realms. Remember to back up your worlds, as they will not work in earlier versions.

— Fixed one of the main errors that influenced the game, namely the switch console (sites blocks of villagers' vacancy).
— Error with maps in the Marketplace.

In order to check all the fixes in practice, download this version of Minecraft BE 1.11.4.2 by clicking on the DOWNLOAD button below. Leave your reviews and share this article with friends.