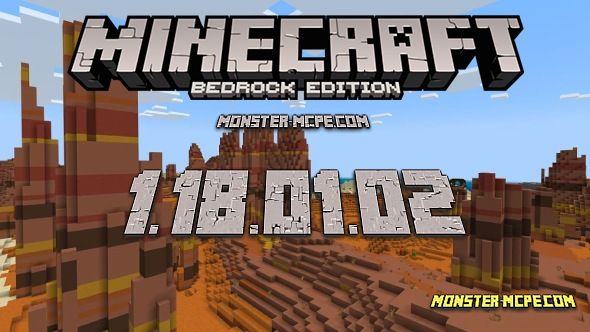 Released a full version of Minecraft 1.18.01.02 on Android. In the update, the developers have fixed serious bugs of the previous release. Reworked 11 items.

An unexpected gift for our community. After the release of the first full version of "Caves and Cliffs 2" found important bugs. They were fixed immediately. There are no additional changes yet.

Fixed bugs.
We fixed 11 bugs. Interesting:
Fixed glitches when using chat or playing on Realms
Reduced Diamond Ore generation to be similar to Java
Fixed a bug with lighting after moving to the Overworld
Fixed movement after reviving or getting up from the Bed
Added a data loss warning when moving files to external storage
Fixed glitches with the multiple user support feature on Android
Fixed stopping the movement of objects and creatures in multiplayer
Teleportation command will not work if the destination is blocked
Fixed an error with the Realms purchase page when the maximum number of Realms is reached
Improved In-game Market

Related News:
Ingen Lost Files Add-on 1.16/1.15+
Do you like dinosaurs? If so, then you will definitely like the new
Mob Indicator V6 Reworked (Script) 1.13+
We present to your attention a new script that will definitely be
Beats UI Reworked Texture Pack
Beats UI Reworked textures offer a new design option for Minecraft.
Minecraft 1.17 Caves and Cliffs update Split Into Two Parts
Decided to divide the long-awaited Minecraft PE 1.17, namely an
Comments (0)
Commenting