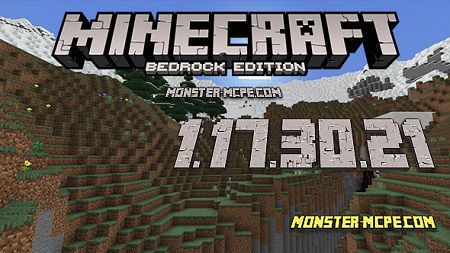 And now it's time for a new beta update that Mojang released for Minecraft today. A few hours ago, the Mojang studio presented a new version of Minecraft PE 1.17.30.21 for all devices that use the Android operating system, as well as for all Android devices in general. In the new update, the developers have made three new changes and fixed seven bugs that relate to the gameplay. We also added nine new changes that relate to the technical part of the Minecraft game. Let's take a look at all the new features of this update below.

The first thing worth paying attention to is the changes that relate to the parity between the versions of the Minecraft Java Edition game for PC devices and Minecraft Pocket Edition for mobile devices. To improve Bedrock Edition, the developers have made three new changes. List of changes:

Now let's look at the most interesting thing in the update, besides any additions, these are bug fixes. In general, as mentioned earlier, Mojang studio fixed seven new bugs that affected the gameplay.

1. General crashes during the gameplay have been fixed;
2. Crashes when downloading any large maps from the Marketplace have been fixed;
3. Crashes when entering Minecraft worlds for certain users of Android devices with Android 11 have been fixed;
4. Such monsters as Zombies, Skeleton and some other creatures of this type of undead will now burn under the sun's rays even when they are close to Powder Snow;
5. Now Minecraft will not load indefinitely if the player clicks on View a set in the Marketplace !;
6. The difference between the color of the category text and the item name has been fixed;
7. The display of Loom Patterns when setting textures has been fixed.