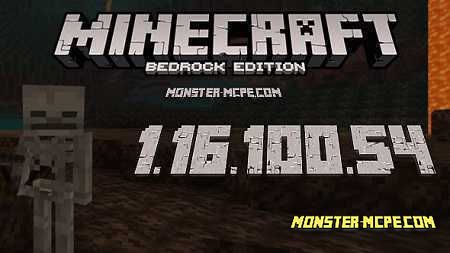 We are glad to welcome all fans of the Minecraft universe. Today we are glad to present to you with a new beta update that was released by the developers of the Mojang studio, namely Minecraft Pocket Edition 1.16.100.54 for all the Android devices! This is a new beta update of the Minecraft game in which Mojang made a large number of changes, in particular on the gameplay and related to Java Parity. In general, 61 changes have appeared in the world of the Minecraft. You just have to test the old game aspects that may have bothered you earlier.

As mentioned earlier, the developers of the Mojang studio presented us with a new update for Minecraft Pocket Edition 1.16.100.54 in which a large number of changes and game aspects were fixed and added. This update, like all previous ones, Mojang is released every week, making the Minecraft world more enjoyable to play and a pleasant pastime for every player.

Let's first turn your attention to the gameplay of the game.

In the new MCPE version 1.16.100.54, the developers have made changes not only those related to the PC version of the game, namely Java Parity, but also those that affect the gameplay.

For example, players can place the fungus such as crimson or warped on a block like Mycelium. 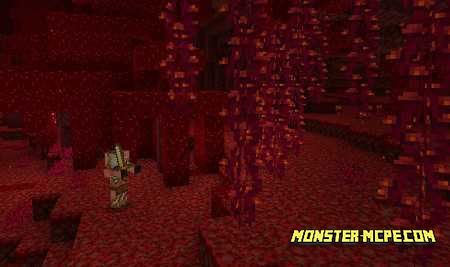 Also, a hostile mob like Slime can climb stairs again. In addition, we want to draw your attention to the fact that other creatures will no longer be able to activate the minecarts in which they are located.

Another bugfix occurred when mobs could not take damage while passing through the Bushes of sweet berry. This bug has been fixed.

As for the Graphics in the game, mobs such as Striders got a newly updated texture for each leg, the textures of legs are now correctly displaying. 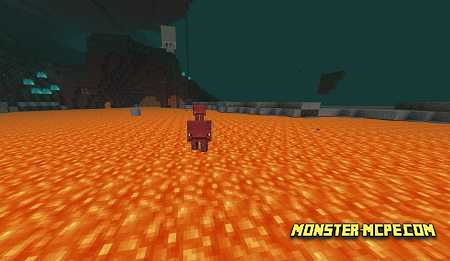 Let's now take a closer look at all the changes that the Mojang developers added for Vanilla Parity. You can see the main thing here:

1. The player can now place some chains horizontally;
2. In a location such as SoulSand Valley, the ceilings are covered with blocks such as Soul Sand;
3. The ceilings of the Basalt deltas are also covered with Basalt;
4. The player can tame Strider even with another rider on it;
5. If the Piglin was somehow zombified they will drop their items;
6. Previously wild Piglins gives only ten points of experience but now they gives twenty points of experience;
7. The lantern can be placed by a player underwater;
8. Piglin in Minecraft PE will offer the same items for exchange as in Java version of the game;
9. Soul fire no longer melts snow and ice;
10. Soul campfire deals 2 times more damage than normal;
11. Zombified Piglin while riding the Striders now cannot hang over it;
12. In the Crimson biome the player can find warped fungus;
13. The babies of Zoglins and Hoglins now have drop after death;
14. Wither Skeletons will automatically attack other hostile creatures such as Piglins;
15. Hoglin will run away from the block as Respawn Anchor;
16. Iron golems will now attack the Hoglins;
17. Zoglin can be damaged when healing and even can be healed when it's damaged;
18. Enchanting Speed of Souls can be found in a chest with Remnants of the Bastion;
19. Netherite armor protects against damage from magma blocks;
20. Soul campfire drops Soul Soil;
21. Strider has the same health as the Java version of the game;
22. Hostile Piglin can equip some armor items;
23. Reduced damage from baby Hoglins.

Other fixes in the game:

In addition to the above changes concerning Java Parity, Mojang developers also fixed 28 gameplay bugs. The main ones on the list:

1. Fixed crashes, increased performance;
2. After killing a normal Guardian and an Elder Guardian;
3. When a player uses fireworks with Elytra;
4. Changed the text of the splash screens on the loading screen;
5. Fixed effects after using Undying Totem;
6. Slime can climb stairs;
7. When using Lodestone, the name of the compass remains the same;
8. Fixed textures of the legs of Strider;
9. Added /fog command for fog settings.
Facebook
Twitter
Pinterest
Minecraft PE 1.16.100.54 for Android
minecraft-1-16-100-54.apk
Download free[125.54 Mb]