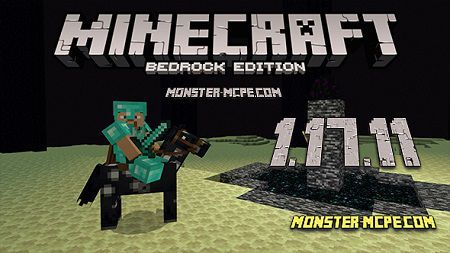 Unexpectedly for everyone, the developers of the Mojang studio have released a new release of the Minecraft PE 1.17.11.01 update and, as always, for all users of Android devices and Android operating systems. The new update is quite small but has very significant fixes that relate to the gameplay of the Minecraft world.

In the new update, the developers have fixed six new bugs, one of which, for example, is that now players will not die when teleporting from the End dimension. Let's take a closer look at all the fixes in the new update below.

As mentioned earlier, this is a small update that has a small number of fixes, namely six. Below you can see a list of the new fixes:

1. Now players will no longer die when teleporting to Overworld from the End dimension at certain heights;
2. Fixed stuck on the respawn screen when dying at the End on certain seeds;
3. Fixed a bug for Xbox when pausing and resuming the game a second time;
4. Horses do not become invisible after the player gets off them;
5. Command / msg works again on servers in survival mode without cheats;
6. Fixed a bug with updating servers.

Related News:
Elingo's End Update Add-on 1.17+
Would you like to change the existing dimension of the End in your
Keep Jumping or You Die Add-on 1.17/1.16+
Do you like challenges? Or maybe you just like the challenge and want
Dimension Parkour Map
Would you like to discover a new world of Parkour with a new map
Vanilla End Ores Add-on 1.16/1.15+
New add-on for fans of the End dimension. Using this add-on, players
Comments (0)
Commenting