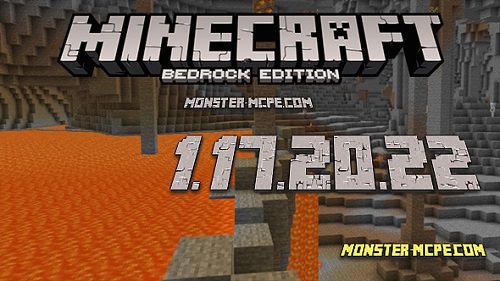 Have you been waiting for a new update? If yes, then the new Minecraft PE update 1.17.20.22 is what you need. The developers of the Mojang studio have released a new test version of Minecraft PE 1.17.20.22 for all Android operating systems, as well as all Android devices. In the new update, new changes were made, namely, they updated the spawning of monsters, made seven changes to the gameplay, and also fixed more than twenty different bugs, and added twenty technical changes.

Let's take a look below at all the features of the new update.

The first thing we will look at is some changes related to the experimental functions of the game.

When using the active Experimental Mode function, monsters will spawn only in complete darkness.

Caves that will be lit by the player will be much safer. Works with artificial lighting only.

Now let's take a look at the new gameplay changes. As mentioned earlier, in total, Mojang made 7 new changes:

1. Now, armor will drop from the burned-out Armor Stand;
2. The spawn of the Phantoms was limited;
3. Changed the conditions for axolotl spawning, namely, now the axolotl will spawn only if there are up to 10 Stone blocks under it and the spawn place is not located in the Bubble Column;
4. It is no longer possible to place an Amethyst Cluster on the Grass Path;
5. Now a layer of snow will melt next to the Torch;
6. The Sea Pickle now changes its brightness outside the water;
7. Dispensers remove the Bubble Column along with the water.

Now let's take a look at the new bug fixes.

In total, a little over twenty different bugs have been fixed in the game.

Below you can see a list of the most significant fixes:

1. Now falling blocks such as Sand, Gravel, and others do not break when landing on certain other blocks;
2. The use of Bone Meal on Moss among Tuff blocks has been fixed;
3. The visibility of the placed Light block when holding the block in the hand has been fixed;
4. Now, in the mode of saving the inventory, the body of the character with the equipment does not remain on the ground after death;
5. The portal on the border of chunks does not break when the player exits Nether World;
6. Now players can break Lianas or Glowing Lichen faster-using scissors;
7. Twisty and Weeping Vines will grow properly after being destroyed by a player;
8. The bug with the blackening of the Enchanting Table has been fixed;
9. Blocks do not turn white when moved by the Piston;
10. The work of the Book of Recipes has been corrected.

And the last one is the changes that relate to the technical aspects of the game.

Related News:
More Tools Add-on 1.16+
Has it ever happened that you have a lot of resources in your
Cave Enhancements Add-on 1.16+
We present to your attention a large and fairly voluminous Cave
Minecraft PE 1.16.100.50 for Android
Greetings to all fans of the amazing and exciting world of Minecraft.
Advanced Darkness Add-on 1.16/1.15+
Do you like to overcome different challenges? What about the
Comments (0)
Commenting