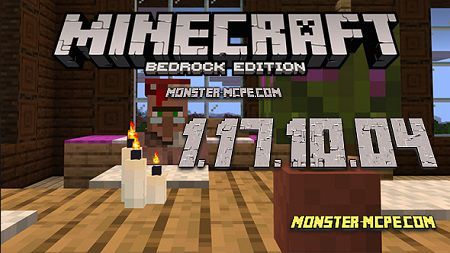 Today the developers of the Mojang studio have released a new Minecraft PE 1.17.10.04 update for all Android devices, as well as all users of Android operating systems. In the new update, Mojang added Candles and Azalea in a pot. In addition, more than 60 different bugs were fixed in Minecraft and the features of the functions in the Experimental mode were expanded. Let's take a closer look at all the features of the new update below.

The first thing worth paying attention to is the candles that have been added to the Minecraft world.

Candles are now available to every player in the game. Previously, they were only in beta. The peculiarities of candles are that they are lit with a flint, they can be placed in a group of up to four, placed on a Cake as a decoration, and players can also change their color using a dye on the workbench.

The next update feature is the potted azalea.

Several types of azaleas have been added to the Minecraft world, namely the usual and blooming azaleas in a pot.

Now let's take a look at the new experimental features.

In total, more than 60 new bugs have been fixed. Most of them were carried over from the test versions of the Minecraft PE game. Below you can see a list of the most significant fixes for this update:

1. Now after hatching baby sea turtles do not disappear;
2. Axolotls will no longer get stuck when passing through Plates and Daylight Sensors;
3. Glowing squids change color to a darker color for all players when receiving damage in multiplayer;
4. Root ground gets a random texture direction when used;
5. Projectiles no longer cast shadows in the Minecraft world;
6. Any dropped items hover at the same height;
7. Fixed a bug with re-enchanting items on the Sharpening Stone;
8. Fixed bugs with the user interface.

And the last one is the changes that relate to the technical aspects of the game.

In total, 31 changes were made for add-on developers. Also, templates for behavior pack mods and texture packs have been updated: